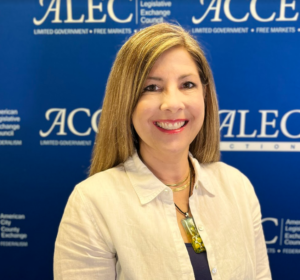 As Director of  Public Affairs, Catherine Mortensen works with reporters from across the country to promote the great work ALEC is doing to protect limited government, free markets, and federalism.  She also produces and hosts ALEC TV where she interviews state and local lawmakers about issues such as criminal justice reform, public lands management, and state and fiscal tax policy.

Catherine is an award-winning journalist who began her career as a local television and radio news reporter and anchor in New Mexico. She later moved into print news reporting in Southern Colorado before serving as an  elected official on the Canon City City Council in Colorado. Catherine  transitioned to political advocacy communications when she worked on Capitol Hill as the Communications Director for Congressman Doug Lamborn (CO-05).  She has worked in conservative political communication for more than a decade in Washington, D.C.

She and her husband live in Fairfax County, Va. She has two grown children. In her spare time Catherine enjoys taking English riding lessons at an equestrian center in Manassas, Va.