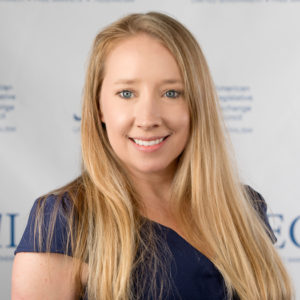 Ashley Varner brings more than a decade of political communications experience and a tough skin to the ALEC Public Affairs team. As such, Ashley provides counsel in a wide variety of areas including member and donor engagement, coalition partner relations and government affairs.

Ashley began her career as a communications coordinator for a small think tank, where she also organized regular women-only firearm training classes. While the gun course was a side project to her communications work, Ashley was so moved by the newfound personal empowerment these women experienced, she decided to protect the Second Amendment full-time.

The next eight years she spent serving the members of the National Rifle Association were exciting, turbulent and wonderful. As an NRA media spokesperson, she debated firearm issues and the importance of self-defense protections on countless radio and television shows and did her best to educate any reporter willing to listen. As a state and local government liaison in several states, Ashley managed hundreds of NRA endorsements in state and local campaigns, advised lawmakers on pro-gun legislation, and employed a number of means to defend firearm owners against government intrusion.

A grassroots activists from a young age, Ashley became a Rush-baby at nine-years-old, joined her first of many political campaigns at 16 and organized protests across the street from her own professors as chairman of a political organization at the University of Missouri.

When not rabble-rousing against big government, Ashley enjoys cooking, mafia movies, football and preparing for Red Dawn. She was a Kansas City Royals fan and Patriot Act opponent before either was cool.