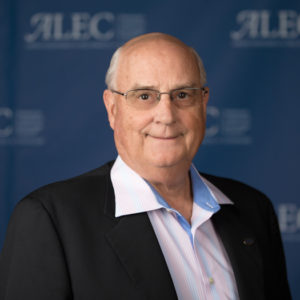 Harold Brubaker was elected to the North Carolina House of Representatives from 1977 to 2012. Brubaker served as joint caucus leader 1979-1980, House Minority Leader 1981-1984 and the first and only Republican Speaker of the North Carolina House of Representatives in the 20th century. He has been the author of major legislations over the years in the financial area as well as insurance, public utilities, and health.

Brubaker has served on the House Financial Institution Committee, Public Utilities Committee, Insurance Committee and Health Committee for over 30 years. He was the House Senior Budget writer during the 2011-2012 sessions.

Since August of 1988 thru 2012 Brubaker has served on the Board of Directors of the American Legislative Exchange Council (ALEC) and as National Chairman in 1994. He has served on the Executive Committee of the Southern Legislative Conference (SLC) and was appointed to serve on committees of the National Conference of State Legislatures. (NCSL) With his national exposure he has contacts in all 50 legislatures.

While serving in leadership in the North Carolina General Assembly, Harold Brubaker gained the experience of the legislative process. The relationships cultivated on both sides of the aisle will prove effective on behalf of his clients.

Brubaker was born and raised in Mount Joy, Pennsylvania. He earned his Bachelor of Science in Agricultural Economics from The Pennsylvania State University and a Masters of Economics from North Carolina State University. Brubaker taught for a couple of years at Randolph Community College in the area of Business. He started Brubaker & Associates Inc. in 1980 as a Real Estate Consulting Group. He is married to Geraldine B. Brubaker and has two children, Jonathan and Justin, and attends Back Creek Friends Meeting in Asheboro, North Carolina.
Brubaker currently operates his own governmental affairs consulting company, Brubaker & Associates Inc.