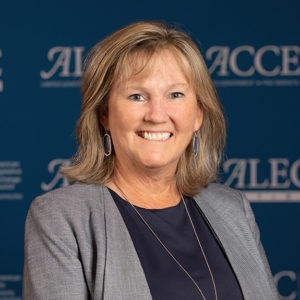 Lisa B. Nelson is the CEO of the American Legislative Exchange Council, a 45-year-old nonprofit think tank dedicated to the principles of limited government, free markets and federalism. It is the largest nonpartisan, voluntary membership organization of state legislators in the United States, and it counts nearly one-quarter of all state legislators and hundreds of business leaders and entrepreneurs as members. Together, ALEC members discuss policy and develop real plans of action to protect hardworking taxpayers and create effective, efficient and accountable state governments.

Since 2014, Lisa B. Nelson has led her team to new levels of success in states across America. Supported by ALEC’s academies, forums and research, ALEC legislative members are 2.71 times more collaborative and 1.3 times as effective at introducing and passing legislation than any other section of legislators across the spectrum.

For 16 years before ALEC, Lisa led government relations departments in the private sector at such companies as Visa and AOL Time Warner. Her work covered issues ranging from technology-based data security, privacy, financial services, and intellectual property in international, federal and state-based legislatures.

Prior to her time in the private sector, Lisa worked on Capitol Hill, where she served as Public Affairs Liaison for the U.S. Speaker of the House Newt Gingrich from 1995 to 1998. As Executive Director of GOPAC in 1994, Lisa led the historic campaign effort that resulted in the first Republican Congressional Majority in more than 40 years.

In 2018, Lisa was asked to serve as a Commissioner for the White House Fellows Program. This preeminent program offers exemplary Americans the opportunity to work with top-ranking officials within the federal government and to participate in an education program with respected leaders of both the private and public sectors.

Lisa has always had a keen eye towards media and new uses for hyper-relevant data, and as technology becomes more ubiquitous, her background in communications for the National Party Conventions has allowed her to stay on the cutting edge. While at National Review magazine, Lisa founded the National Review Institute. She continues to actively participate in organizations and foundations in Washington, D.C. and serves on the board of the State Financial Officers Foundation.

Lisa is a political science and international relations graduate of the University of California at Berkeley. She and her husband David live in McLean, Virginia and have two children, Sam Creed and Britton Elizabeth.

Arizona Can Seize the Opportunity to Restore Economic Competitiveness

Lisa B. Nelson/8 months ago

Appreciating the Women of ALEC During Women’s History Month

Lisa B. Nelson/10 months ago

Lisa B. Nelson/2 years ago
END_OF_DOCUMENT_TOKEN_TO_BE_REPLACED