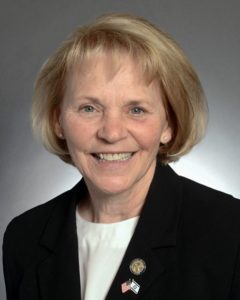 Mary has a long record of public service. Mary served as Minnesota’s Secretary of State from 1999 to 2007, as a member of the Minnesota House of Representatives from 2008 to 2012 and has served in the Minnesota Senate since 2013. While serving as Secretary of State, Minnesota ranked number one in voter turnout for all eight years of her term. Mary was nationally recognized with the LeeAnn Elliot Excellence in Election Administration Award, was chosen by the Women of Today organization as Minnesota Woman of Today, served as President of the National Association of Secretaries of State, and as President of the National Electronic Commerce Coordinating Council.

Mary grew up in Pierz, Minnesota, and currently resides in Big Lake with her husband, Ralph. Mary and Ralph have been married for 52 years, and together they have 4 children and 16 grandchildren. She has long been involved in her local community. She is a current member of the Big Lake American Legion Auxiliary, Big Lake Yellow Ribbon group, and an active member of her local church. She has also previously served as the treasurer of the Monticello/Big Lake Hospital and Nursing Home, chaired the capital campaign to establish the Sherburne History Center, and as a chair and member of the Big Lake Community Education Advisory Council among many others.