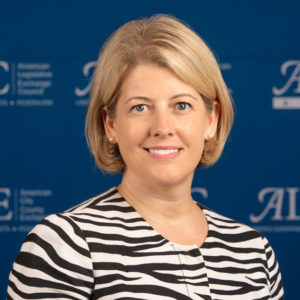 Sara Armstrong is vice president of Political Affairs and Federation Relations at the U.S. Chamber of Commerce. She guides the Chamber’s national political efforts and election-related activities and directs outreach efforts to the grassroots and the federation of trade associations and chambers across the country.

Previously, Armstrong served as chief of staff at the Republican National Committee after leading the 58th Presidential Inaugural Committee as chief executive officer. Before that, she was vice president of the 2016 Republican
National Convention in Cleveland. Armstrong served at the RNC as Chief Operating Officer for the 2014 election cycle and as deputy chief of staff during the 2012 presidential election cycle. She is also a former RNC director of member services. Armstrong was a special assistant to President George W. Bush and deputy chief of staff to first lady Laura Bush and served in the Bush administration as director of the White House Visitors Office.

Armstrong resides in Alexandria, Virginia, with her husband, David. She was raised in Texas and South Carolina and received both her B.S. and M.B.A. degrees from the University of South Carolina.