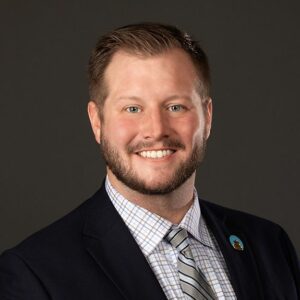 Harold “Trey” Stewart is a fifth-generation Aroostook County native who is serving as one of the County’s two state senators. Trey is the grandson of former Representative and attorney Harold “Bud” Stewart and the son of Superior Court Justice Hal Stewart and the late Melanie Stewart who tragically lost her battle with cancer in 2021. Trey graduated from Presque Isle High School (2012) and then attended the University of Maine (2016) before returning home to Aroostook County. Trey completed his MBA from the University of Maine (2018) while in his first term in the Legislature. He will graduate from University of Maine School of Law in May 2022 while fulfilling his legislative responsibilities.  He looks forward to following in his grandfather’s and father’s footsteps and practicing law in the County with a goal of ensuring that northern Mainers have access to legal representation.