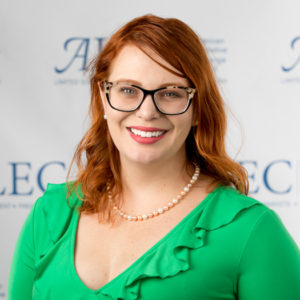 Alyssa Hackbarth is the Manager of Public Affairs and Digital Strategy with a focus on building ALEC’s social media presence. Prior to joining ALEC, Alyssa served as the War Room Director for the Washington Free Beacon.

While at the Free Beacon, she watched all of the cable news and can tell you which anchor is who just by the sound of their voice. Her previous writings have appeared on FoxNews.com, The Drudge Report and Forbes. She is also a former communications associate of Americans for Tax Reform.

Prior to moving to DC, Alyssa has volunteered for numerous political campaigns in her home state of New Jersey where she ran her own campaign for school board of her high school’s school district.

Alyssa is a graduate of Southern New Hampshire University, where she attended college online. She also holds a minor degree in bagpipe performance.

She also sits on the advisory board for White Coat Waste Project, a non-partisan watchdog that works to stop the taxpayer-funded experiments on animals.