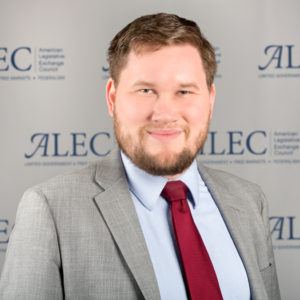 Daniel Turner is a Research Analyst for the Center to Protect Free Speech. In this role he conducts research and analysis regarding free speech issues and works to develop partnerships with other organizations that focus on free speech. From ALEC to the Washington-state-based Freedom Foundation, Daniel has focused on state-based solutions for policy problems.

Daniel came to ALEC, shortly after he completed his MA in politics at Hillsdale College’s Van Andel Graduate School of Statesmanship in 2015. During his studies, he focused on the thoughts of the framers of the Constitution and the continuing relevance of their ideas.

Prior to graduate school, Daniel worked in Washington state politics, serving as a staff member of a Washington State senator; at the Washington Farm Bureau, as a legislative campaign manager; and as state chair of the Washington Young Republicans Federation. Service in state politics only confirmed his belief that government should be limited and policy should be handled at the state and local level whenever feasible.

In 2008, Daniel received BA in government with an emphasis on public policy from Patrick Henry College. When not working to advance limited government, free markets and federalism, Daniel can be found backpacking on the Appalachian Trail, trying new brews (coffee or beer), or doing some brewing himself.