This article originally appeared on www.redstate.com on November 12, 2013.

The growing role of big government in our lives presents a continual attack on the cherished and hallmark American values of life, liberty and the pursuit of happiness. In no area is this expansion more troubling than the criminal justice system. Actions defined as crimes have proliferated to the point that the average American now inadvertently commits an estimated three felonies a day. This explosion of criminal statutes has little to do with protecting our communities; it is simply another symptom of the expansive reach of big government. 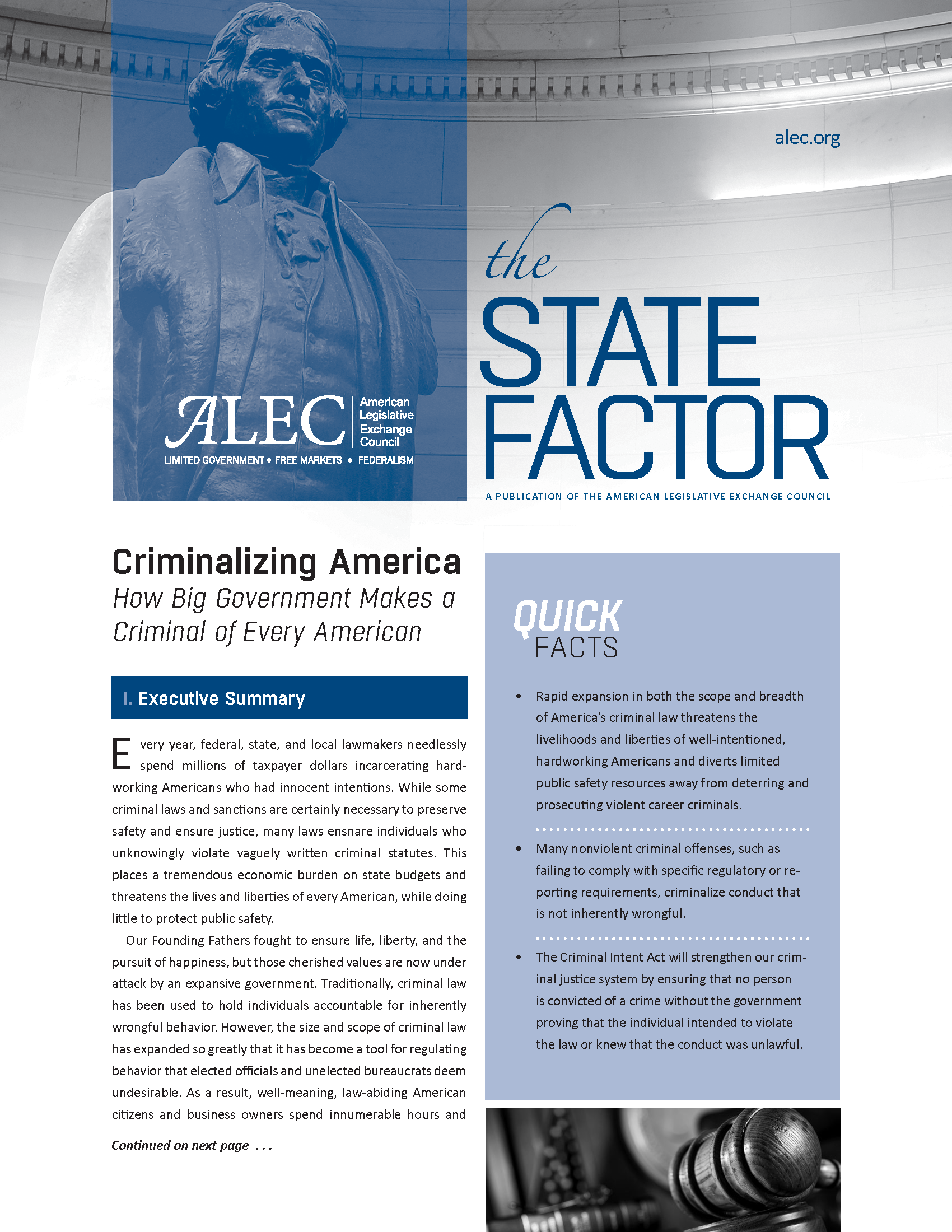 While some criminal laws and sanctions are certainly necessary to protect public safety and ensure justice, many laws ensnare individuals who engage in ordinary activities they had no reason to suspect were criminal. Policymakers can help stem the tide of overcriminalization by requiring proof of criminal intent before charging an individual with a crime.

Criminal intent requirements reserve criminal sanctions for individuals who intended to act unlawfully. Additionally, they ensure that public safety resources are focused on dangerous offenders rather than targeted at average Americans who are often unaware of vague and ambiguous laws.

The sheer size and complexity of criminal statutes in America forces well-meaning, law-abiding individuals and business owners to spend innumerable hours and dollars fending off criminal prosecution for actions they never suspected were illegal. In Oregon, a man was sentenced to 30 days in jail for collecting rain and snow run-off on his property. In Maryland, officials gave a $500 criminal fine to six 10-year-old children who were running a lemonade stand without a permit. In Michigan, a stay-at-home mother was threatened with 90 days in jail for watching her friends’ children for less than an hour every day while they waited for the school bus.

The victims of overcriminalization are numerous and there are so many criminalized actions that no one has been able to determine a definitive count. At the federal level, best estimates put the number of crimes at approximately 4,450 and the number of regulatory violations with criminal penalties at as many as 300,000. These federal laws are often duplicative of state and local statutes and, in many cases, contribute to America’s rampant prison overcrowding problem.

The untethered and rapid expansion of the number of criminal laws has been accompanied by an equally concerning change to the character of criminal offenses. Behavior that is illegal simply because the law makes it so, rather than because it is morally blameworthy, constitutes a growing percentage of all criminalized conduct. Such offenses extend the role of the criminal justice system beyond protecting communities and ensuring justice to the point where it is used to regulate what unelected, career bureaucrats deem undesirable behavior. As a result, taxpayer dollars are used to enforce lemonade stand regulations and harmless paperwork violations rather than protecting communities against dangerous crimes.

Codifying criminal intent requirements protects innocent Americans from overreaching, vague crimes and reins in big government. Under these reforms, policymakers are still able to enact laws for which an individual can be charged without the presence of criminal intent. To do so, the legislature must simply state clearly that no willful or purposeful intent is required to be convicted of that particular crime.

Americans can be prosecuted for actions they did not know were criminal. In the case of inherently wrongful actions, ignorance of the law is no excuse. However, when thousands of illegal actions are not fundamentally immoral, the average American has little way of knowing which of their actions constitute crimes. Combined with the intricate and vague nature of criminal statutes, the lack of guidelines based on intrinsic wrongfulness leaves individuals vulnerable to prosecution for actions they have no reason to suspect are illegal.

At the American Legislative Exchange Council, we work with state legislators around the country to curb the reach of big government and ensure criminal intent requirements protect the freedoms and livelihoods of hardworking Americans and business owners. Our Criminal Intent Protection Act sets a framework from which policymakers can protect individuals from government expansion and unjust punishments.

Unless we act to stem the tide of overcriminalization, the livelihoods and liberties of Americans will continue to come under assault by an overreaching government. The nation needs to use its precious public safety dollars to protect communities and ensure justice, not as a tool for regulating behavior elected officials and unelected bureaucrats deem undesirable.

“Criminalizing America: How Big Government Makes a Criminal of Every American” is available at www.alec.org/criminalizing-america.