Leading the Fight for Tax Cuts in Maryland 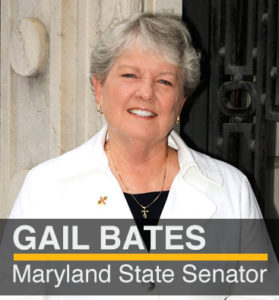 This week, ALEC and FreedomWorks introduce Senator Gail Bates from Maryland’s 9th district. Gail’s careers as a teacher and tax supervisor motivate her to focus on education and tax issues as a legislator. She has lived in Maryland for the majority of her life and served in the Maryland’s House of Delegates before being elected to the State Senate in 2014. She currently resides with her husband David and their two children and is passionate about making her state better for all Marylanders.

As a Member of my County Farm Bureau, I started following land use and other issues.  When a friend filed to run for County Council, I helped and later ran his Campaign and helped another friend run for County Executive.  I like helping people and solving problems as I did as assistant to my County Executive.  When a vacancy occurred for House of Delegates, I applied and was appointed.  After three full terms in the House, I ran for State Senate.

How has your experience as a teacher helped you as a state legislator?

In your view, what is the biggest issue facing your state’s legislature?

My priority is managing the budget and the impact of pension liabilities on our spending.

As the tax debate was heating up late last year, you signed an ALEC letter to Congress favoring eliminating the state and local tax deduction even though this wouldn’t play well in a high-tax state such as Maryland. Why?

Maryland is a very high tax state and I was very happy to sign the letter to Congress to repeal the deduction on the state and local income taxes.  I know it is counter-intuitive but,  I believe it’s going to help people in the long run throughout the country and hopefully it will encourage Maryland to begin to look at cutting taxes and spending.

I serve on the Joint Audit Committee and became concerned over the many audit findings that were not being fixed, some agencies with as many as 8 or 10.  I worked with the Auditor to formulate legislation to allow the budget committees to restrict spending until findings are resolved.  Although the legislation did not pass because of the press I generated, the Joint Committee made this part of its procedures. The agencies have taken these findings seriously as a result.

I have learned so much at the meetings and met so many experts I can rely on.  The research and model policies are invaluable.

Can you share a fun fact that’s not on your official bio?

I bleed Burgundy and Gold and love to sing and dance to Hail to the Redskins.

Also, after my father retired, he became Santa Claus for our local mall.  My birthday is Christmas Eve, so it is cool to be Santa’s daughter.