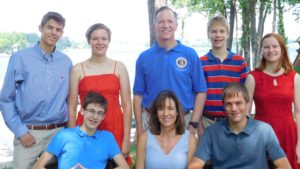 I ran for the Missouri State Senate in 2014 because I was concerned with the direction the state and our country were going, and I felt called to do something about it.  I believed, and still believe, that the principles of small government and economic opportunity are critical to move our state and our country forward.

What is your favorite thing about Missouri?

I love Missouri because it is a place of common sense, conservative values, and Midwestern friendliness.  Most places in Missouri have a small town feel, and our number one industry is agriculture, yet Missouri is a leader in biotech, medicine, and finance.

While Missouri has Republican supermajorities in both chambers of the legislature and a Republican Governor, our state is threatened by several ballot initiatives that would undo much of our success of the last decade.  A referendum in August could repeal Right to Work and a misnamed initiative in November known as Clean Missouri would manipulate redistricting to elect more progressives to Congress and the state legislature.

If I could wave a magic wand, I would like to see Missouri become the 28th Freedom to Work state.

I chair the General Laws committee where I have shepherded labor reform measures such as government union reform, right to Work, prevailing wage reform, and repeal of union-only project labor agreements. I am also a member of the Education Committee where I authored and passed legislation to allow public school students the choice to take online courses they need to succeed.  On the Ways and Means Committee I have championed tax cuts.

My most important accomplishment has been this year’s passage of the Government Union Accountability Act. Reforms included in this bill include recertification elections, financial transparency, the requirement for annual dues authorization, openness in collective bargaining, and limitations on release time.

ALEC is a tremendous resource in many ways including its publications which are very valuable.  I go to at least one meeting a year, and the opportunity to learn from and network with my colleagues in other states is invaluable.

I’m working on my private pilot license right now, and on a couple of recent flights I experienced the joy of “moderate turbulence” in a Cessna 150. My instructor kept reminding me to rely on my training and “keep flying the airplane.” I think of it as a fitting metaphor for life in the political arena.