Legislator of the Week: Speaker Ron Ryckman of Kansas 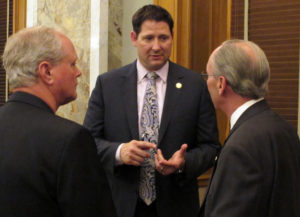 This week, ALEC and FreedomWorks introduce Kansas State Representative Ron Ryckman. Representative Ryckman serves as Speaker of the Kansas House of Representatives. He was raised in western Kansas and has spent the past 25 years in Johnson County. As a student athlete at MidAmerica Nazarene University, he was dedicated to teamwork and learning business, which built the foundation for his achievements. His civic leadership runs strong. Ron has served on the Olathe City Council since 2009, and been elected to the Kansas House of Representatives first in 2012, then 2014, and again in 2016 where he shortly after was elected as Speaker of the House. He previously served as chairman of the House Social Services Budget Committee and the House Appropriations Committee. Ron and his wife Kim have been married for 22 years and have three children, Haley, Christian, and Chase.

My father was a teacher and community leader in my home town of Meade, Kansas. He has always been a positive role model and is someone I have always looked up to. He first ran for the Kansas House in 2010 and inspired me to follow in his footsteps and run in 2012. I had the distinct privilege of serving alongside him in the House from 2013 to 2016, which was one of the most rewarding opportunities of my lifetime.

If I could wave a magic wand, I would return the power of the purse to the legislative branch in Kansas. As the people’s elected representatives, it is our responsibility to prioritize spending and appropriate funds accordingly. We are held accountable by the voters. Amending the Kansas Constitution is the only solution to guarantee a clear and defined separation of powers when it comes to spending taxpayer dollars.

Do you serve on any committees? If so, which committees and why? How do you think you have impacted them?

I am proud of one of the first bills I carried in the Legislature, now in statute, which requires welfare and unemployment recipients suspected of using illegal drugs to be screened. I am also proud to have led the implementation of performance-based budgeting which ensures that tax dollars are spent as efficiently as possible throughout the appropriations process.

ALEC has afforded me several opportunities to confer with other legislators on the similar issues that impact our respective states. I have found that ALEC events hosted across the country help identify commonsense approaches to the multifaceted issues facing today’s legislatures.

What is your favorite thing about Kansas?

Kansas is my home. It’s where I was raised, and where my wife and I raised our children. We have great schools, strong businesses, and a unique, collective sense of community. Kansans exemplify a sense of compassion and altruism that I have yet to see anywhere else.

I was born in Germany, started my first business in the fourth grade, and owned a baseball card shop in high school.