Restoring the Balance of Power 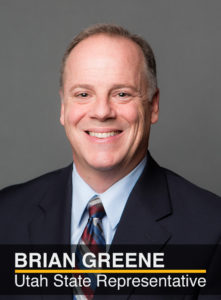 This week, ALEC and FreedomWorks introduce Utah State Representative Brian Greene from Pleasant Grove, Utah’s 57th district. A graduate of Brigham Young University serving in his fourth year, Greene is a leader in criminal justice reform and occupational licensing issues. He serves on no less than six committees.

I ran for office in 2012. Around this time, especially after the 2008 presidential election, progressive policies were sweeping the nation. Like many active conservatives, I was concerned with the direction the country was moving in. During this time, I was vocal about my concerns to just about anyone who would listen. By 2011, my wife was tired of hearing me complain and one day told me “either do something about it or shut up.” I decided to do something about it. In the 2012 election, there was an open seat so I saw the opportunity and I had the interest, so I ran for office.

In my view, the biggest issue before my state’s legislature is not a particular policy issue but rather, the threat to liberty and good limited government posed by the weakening of the legislative branch in comparison to the executive branch. In Utah, the legislature is only in session for 45 days a year. This being said, the other approximately 320 days there is policy being made by the executive branch and not by the legislative branch. We need to do more to maintain the balance of power. Most recently, we had a legislator resign which called for a special election. Since we are out of session, the only way to go into session to determine the rules of the special election is for the governor to call us into session. However, the governor did not call us into session and instead is making the decisions on their own. The primary for this election has already taken place and the general election is next month. This is a timely and telling example of how the legislative branch is weakening in comparison to the executive branch.

As I explained before, the biggest issue the legislature faces is the weakening legislative branch. If I could “wave my magic wand,” I would allow the legislature to call themselves into session outside of the normal 45 day session. This would allow the legislature to be involved in important policy making that takes place outside out the days we are in session. We need the ability to make policy when important policy needs to be made. Allowing the executive branch to make all the decisions when we are not in session is not good government. Since I cannot “wave my magic wand,” a constitutional amendment would need to be passed in order to implement this.

As a legislator, ALEC is a great resource to have. I enjoy interacting with people with different ideologies, but most of the time these people will impose their views on me rather than us working together to develop policy.  ALEC allows me meet and talk with like-minded conservative individuals which is more productive in developing good policy. The model policies developed by ALEC are very helpful for me. ALEC provides the best model policy out there. I have used their model policies on issues such as civil asset forfeiture reform and occupational licensing reform. As a result, I have been a leader in my state on both of these issues.

Can you share a fun fact about yourself that’s not in your bio?

My wife and I are high school sweethearts and we’ve been married nearly 34 years.  We grew up in the same neighborhood. From the age of five, I would pick on her and tease her. To this day she loves to tell people that she never predicted we would end up together because I was such a brat to her growing up.