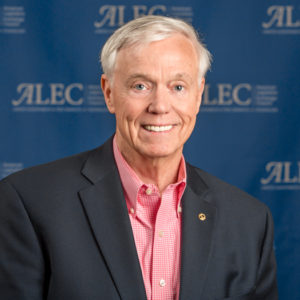 Under the leadership of Speaker William James “Bill” Howell, Virginia has become known for its sound fiscal management. While Washington deals with massive debts and deficits, Virginia has produced four straight budget surpluses totaling $2 billion. Virginia’s Rainy Day Fund is on track to exceed $1 billion by the end of the next budget cycle. Virginia has made targeted investments in education, public safety and other core services while keeping taxes low and reducing the state’s debt burden. As a result of this conservative approach, Virginia is one of only 12 states with a Triple-A bond rating from all three major credit agencies.

Speaker Howell has led the charge to tackle some of the Commonwealth’s most pressing challenges. In 2012, Speaker Howell advocated major reforms to the Virginia Retirement System that reduced unfunded liabilities by nearly $9 billion. In 2013, he took the unprecedented step for a Speaker of sponsoring a comprehensive transportation funding plan – the first transportation funding overhaul in 27 years. Working with Governor Bob McDonnell, Howell helped successfully pass the bill, which will generate over $6 billion in new statewide funding for roads, highways and transit over the next five years.

Speaker Howell is also a strong advocate of environmental preservation and conservation efforts. A strong supporter of restoring the Chesapeake Bay, he led the effort to enact Virginia’s national model program for open-spaces land preservation using free-market principles. Speaker Howell has also been a leading proponent of Virginia’s land conservation tax credit program, which has helped preserve over 500,000 acres since its creation 10 years ago.

Speaker Howell was named the 2013 “Legislator of the Year” by the Virginia Chamber of Commerce. He was also named one of Governing Magazine’s 2013 “Public Officials of the Year.”

Speaker Howell has been nationally recognized for his leadership in standing up to Obamacare’s Medicaid expansion. A column in the Wall Street Journal called Virginia’s efforts to resist Medicaid expansion “A Republican Victory on the Front Lines of Obamacare.”