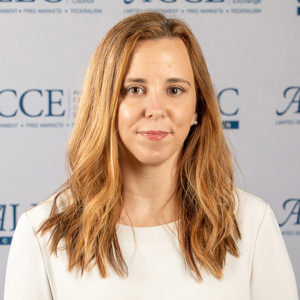 Brooklyn is a native Alabamian with an undergraduate degree in philosophy and a Juris Doctorate from the University of Alabama.  She has a wide array of experience with conservative grassroots organizations and political campaigns.

After becoming enamored with political philosophy as an undergrad, Brooklyn interned in Washington DC as a law student, and after graduation, pursued a career in public policy.  She took over as Senior Director for a conservative grassroots organization in Alabama where she built the organization’s online and social media presence, grew their grassroots network and was often found in Montgomery advocating for conservative principles with members of the State Legislature.

When her friend Attorney General Luther Strange was up for re-election, she was excited to be tapped as his campaign manager. Following the re-election victory for Attorney General Strange, an opportunity arose in Washington DC and Brooklyn left Alabama politics to work on health care issues on the grassroots level.  Having several family members in the health care industry sparked an interest in health care policy, which she continued to hone at ILS.  A long-time fan of ALEC from her law school days, Brooklyn was honored to join the team as Director of the Health and Human Services Task Force.

Outside of work, Brooklyn can often be found watching Alabama football (Roll Tide!), reading or curled up with her Cavalier King Charles Spaniel, Lucy.

Arizona Leads Nation in Giving Patients the Right to Try

The Controversy Surrounding 340B Program