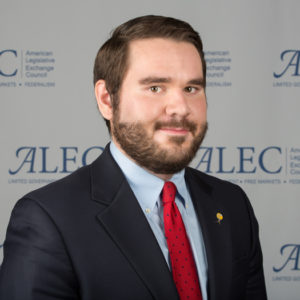 Elliot Young serves as research analyst for the ALEC Center for State Fiscal Reform, where he specializes in data research and statistical analysis of pro-growth economic policies.

Prior to joining ALEC, Elliot was Research Manager at the Institute to Reduce Spending, where he devised and steered the research agenda and goals for the Institute, performed quantitative and qualitative analysis of budgetary data and fiscal policies, and worked with lead scholars to assess federal spending and the impact of budget and fiscal rules.

He is an energetic advocate for economic reform, and looks forward to putting his experience to use in both work for ALEC and in academia.

In May 2015, Elliot earned his Bachelor’s in Economics from Rhodes College in Memphis, Tennessee. He specializes in econometric analysis and data research.

Elliot is a collector of vintage watches, and enjoys repairing them in his spare time. He also plays the piano, cellars craft beer, and cooks for himself and his co-parented cat, Nugget. He is always in search of a better cup of coffee or new favorite craft beer.