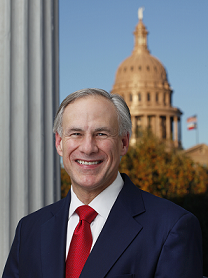 Greg Abbott, the 48th Governor of Texas, continues building on his record of strong, state-focused leadership. Previously the longest-serving Attorney General in Texas history and a Justice on the Texas Supreme Court, Governor Abbott has long defended the constitutional principles on which this nation were founded.

Governor Abbott has already been hailed as one of the most formidable leaders to enter American politics. It’s been said that he can bring a new dimension to conservatism, and even a new approach to government. He and his wife, Cecilia, have been married for 34 years. She is a former school teacher and principal, and the first Hispanic First Lady of Texas.