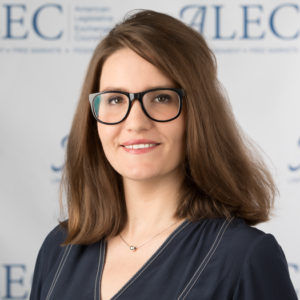 Inez Feltscher Stepman comes to the task force with five years of experience in education reform and school choice. From her start as an intern at the Heritage Foundation to her work with National School Choice Week and Center for Education Reform, Inez is enthusiastic about creating an education system that delivers the American Dream’s promised opportunity to every student. She is a recent graduate of the University of Virginia School of Law and completed her undergraduate degree in Philosophy at University of California, San Diego.

A San Francisco Bay Area native, Inez is used to arguing for limited government, free markets and federalism in hostile waters. And as the first-generation American daughter of parents from the other side of the Iron Curtain, she is passionate about preserving the principles of the American Founding, which she believes created a uniquely free and prosperous country.

When she’s not thinking, speaking, writing or arguing about education reform and American Founding principles, she can be found thinking, speaking or complaining about those topics to her long-suffering husband at home with a martini. When she can be convinced to temporarily abandon politics, Inez enjoys 1920s architecture and design, fashion, and laughing at the life struggles of her quasi-pathetic puggle, Thor.

Firing Blanks: Why the Current Focus on Guns in Schools Won’t Solve the School Safety Debate