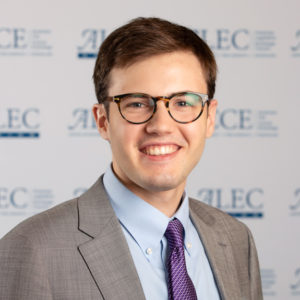 James serves as a Development Coordinator at the American Legislative Exchange Council. In this role, James works with donors and ALEC partners in the business and non-profit community.

James comes to ALEC after graduating in the spring of 2019 from Furman University in Greenville, South Carolina, where he studied Latin, Religion and Anthropology. Before joining ALEC, he worked as a Latin tutor, car salesman, vineyard associate, and humanities researcher. He has had several articles and essays published about his various academic interests.

Originally from Kansas City, Kansas, James maintains a considerable amount of state and city pride for his home, including a staunch defense of Kansas wine.  In his free time, he can generally be found with a book in one hand and a cup of tea in the other.