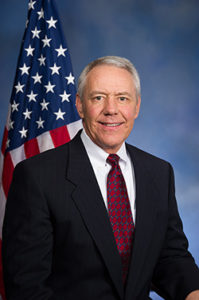 Congressman Ken Buck is a Republican from Windsor, representing Colorado’s 4th Congressional District. He was first elected to Congress on November 4, 2014, and is currently serving his second term in the United States House of Representatives. Ken serves on the House Judiciary Committee and the House Committee on Rules. He serves on the Judiciary Subcommittees on Immigration and Border Security and Crime, Terrorism, Homeland Security and Investigations. After law school, Ken worked for Congressman Dick Cheney (R-WY) on the Iran-Contra Investigation and then became a prosecutor with the U.S. Department of Justice. In 1990 Ken joined the Colorado U.S. Attorney’s Office where he became the Chief of the Criminal Division. Ken’s wife Perry is currently a Representative in the Colorado House. They have two children.