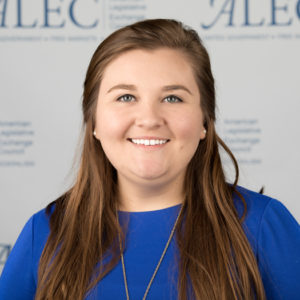 Lacey currently serves as the Director of Commerce, Insurance and Economic Development at ALEC and was previously ALEC policy manager. Before taking this role, Lacey worked as the Event Coordinator where she helped with many of the logistics for the three conferences that ALEC holds each year.  Before being brought on at ALEC, she worked at the Leadership Institute, first as a Career Services Intern and then later as a Programs Assistant.

Her first introduction to Washington, D.C. was a Government Relations and Advocacy internship with International Justice Mission that she completed during her last semester of college in spring of 2015.

Lacey is a West Virginia native, but she has resided in Virginia for the past few years, while attending college at Liberty University in Lynchburg, Virginia and working in Washington for the last year. She studied Government: Politics and Policy and Philosophy at Liberty, and she graduated in May 2015.

Lacey became active in politics as well as in her community while at college, where she had the opportunity to volunteer on a few political campaigns as well as be a site leader at a student-run, community outreach ministry called Campus Serve, where she worked with young, single, low-income mothers and their children.

Malaysian National Election — A Pivot away from Autocracy