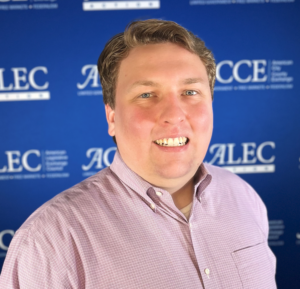 William “Bill” Dumais III is a member of the three-person legislative outreach team at ALEC. Bill engages with state legislators from across a twenty-state portfolio, offering both membership and public policy support. Bill works to strengthen relationships with both ALEC member and non-member legislators, as well as other constituencies, through proactive engagement efforts focused around ALEC’s model policies and ten policy task forces. He is also involved in media monitoring.

Previously, Bill worked at the Council for Responsible Nutrition (CRN), the leading trade association representing the responsible dietary supplement and functional food industry. During his time with CRN, he was a key member of the government relations team with both a federal and state lobbying focus. In addition to providing compliance and technical support, Bill led the association’s first organized letter-writing advocacy campaign, where CRN member executives & companies encouraged their congressional representatives to introduce legislation that would clarify the legal & regulatory status of hemp-derived cannabidiol in dietary supplement products. He is a veteran of CRN’s “Day on the Hill” annual lobby day and has led industry-centric education efforts with newly elected members of both the 116th and 117th Congresses. Bill also served as the industry liaison for the bipartisan, bicameral Congressional Dietary Supplement Caucus and was tasked with organizing quarterly congressional educational briefings and leading caucus recruitment efforts.

Bill grew up in East Lyme, Connecticut, and has lived and worked in the Mid-Atlantic region since earning his Bachelor of Arts from Providence College in 2017, where he majored in Political Science & English. Bill is a seafood enthusiast, an avid football & college basketball fan, and enjoys biking and walking throughout Rock Creek Park.