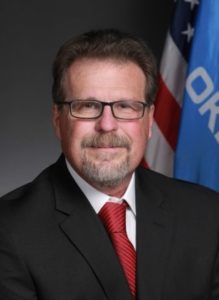 Micheal Bergstrom was elected in 2016 as an Oklahoma State Senator. He was re-elected for a second term in 2020.

After earning his bachelor of arts degree in English from the University of South Florida, Bergstrom conducted his graduate studies at Northeastern State University.

Prior to being elected, Bergstrom spent a decade in land surveying, including five years in a county engineering department, then 10 years in journalism as a reporter, editor, and freelance writer where he frequently covered government and business. He then became a full-time educator and had 20 years of experience in public education, the last 18+ years with Bluejacket Public Schools in Northeast Oklahoma. Bergstrom, whose teaching certifications include world and American history, U.S. government and economics, taught high school English and yearbook in Bluejacket.

Bergstrom was the ALEC State Legislator of the Month in February 2020. He has been a recipient of awards every year from the Oklahoma Second Amendment Association, including Freshman of the Year and the Minuteman Award (the following three years). He was given the Oklahoma Legislative Award by the Oklahoma Sheriff’s Association in 2018 and 2019 and has received the Oklahoma Farm Bureau 100% award and the Oklahoma Cattleman’s Association top award.