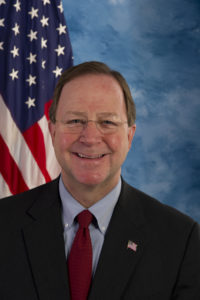 Congressman William H. “Bill” Flores was elected to the U.S. House of Representatives in November 2010. After observing a movement to reverse American exceptionalism and damage our nation’s fiscal solvency, Flores retired from a successful career in the private sector to run for Congress in order to restore America’s promise, prosperity and security for future generations. He works hard to achieve this mission every day and believes that by working together we can restore America to “the Shining City on a Hill” that President Reagan spoke of frequently.

Flores is serving in his third term representing the 17th Congressional District of Texas, which covers portions of Central Texas from Waco to Bryan/College Station to north Austin. For the 114th Congress, Flores was elected by his fellow conservative colleagues to serve as Chairman of the Republican Study Committee (RSC), the largest caucus in the U.S. Congress and an influential group of House Republicans committed to economic opportunity, national security, fiscal responsibility, American values and limited government. Additionally, Flores serves on the powerful House Energy and Commerce Committee.  During his first two terms in the 112th and 113th Congresses, he served on the House Budget, Veterans’ Affairs, and Natural Resources committees

A ninth generation Texan, Flores was raised in Stratford, a small town in the Texas Panhandle, and comes from a long Texas family ranching heritage. He is the oldest of six children and was born at Warren Air Force Base in Cheyenne, WY. After his father’s military tour of duty, his family moved back to the family’s roots in Stratford, Texas. As the son of a rancher, Flores learned the value of hard work and the basics of the American Free Enterprise system. His entrepreneurial experience began at age 10 delivering papers, and by age 13, during the summers, he was working 12 hours a day, six days a week, driving a tractor, building fences and working cattle. The strong foundation that he and his five brothers and sisters were raised on set the stage for a successful career. Despite the hardships, the Flores family never asked for or sought government assistance. Flores learned an early lesson that the value of hard work, personal responsibility and saving for the future are important aspects of the American spirit and reflect the values which guided our Nation’s Founding Fathers.

Through hard work, determination and prudent saving, Flores paid his own way through Texas A&M University, from which he graduated in 1976 with a BBA in Accounting (Cum Laude).  In 1985, he received an MBA from Houston Baptist University. He and his wife Gina have provided scholarships, faculty fellowships, and infrastructure investments to support higher education at Texas A&M University and Houston Baptist University – portions of which are dedicated to assist first generation college students, primarily from underrepresented groups. They are also major benefactors of K-12 education, including support for Yellowstone Academy, which provides elementary education to children in one of Houston’s poorest inner city areas.

In 1978, Flores earned his Texas Certified Public Accountancy (CPA) license.  Before retiring to pursue public service, Flores worked in the energy industry for nearly three decades. During that time, he served as a CFO, COO or CEO for successful energy companies, ultimately serving as President and CEO of Phoenix Exploration Company, an oil and gas company focused upon the discovery of American oil and gas resources. This company was started in late 2005, and in light of its rapid growth, was included in the Houston Chronicle’s Top Private Companies lists in 2007 and 2008.

As a company leader and entrepreneur, Flores has firsthand experience in helping to create hundreds of good-paying American jobs. He also understands the problems that bad government policy and regulation can cause for American job creation and economic prosperity.

Flores has also held numerous governance positions for various public companies, private companies and non-profit organizations. Today, he serves on the Board of Trustees of Houston Baptist University, the Board of Directors of Texas A&M’s Private Enterprise Research Center, the advisory board of the Ranching Heritage Association, and the Congressional board of directors of the Congressional Hispanic Leadership Institute (CHLI).

His previous governance positions include Commissioner of the Texas Real Estate Commission, Director and Past Chair of The Association of Former Students of Texas A&M University, as well as serving on the Boards of the Phoenix Exploration Company, Petro Alliance Services, Ltd., Marine Drilling Companies, Inc., OneOffshore, Inc., Great Western Resources, Inc. and The PARC Recreational Ministries Corp.

In 2013, Houston Baptist University honored Flores with the Distinguished Alumnus Award. In 2012, Flores was inducted into the Texas A&M University Corps of Cadets Hall of Honor. In 2011, Texas Tech University’s Ranching Heritage Association honored him with the Boss of the Plains award in 2011 to reflect his association with ranching. In 2010, Texas A&M University honored him as a Distinguished Alumnus, the highest honor bestowed upon a former student of A&M, and in 2003, he was recognized as an Outstanding Alumnus of Texas A&M’s Mays Business School.

He and Gina are also major contributors to Wounded Warrior programs. Their community involvement includes service as an active volunteer for charitable causes and not-for-profit organizations. Flores’s hobbies include snow skiing and flying. He is an instrument rated private pilot with more than 2,500 hours of pilot-in-command time.

Flores and his wife Gina have been married for 38 years and reside in Bryan, Texas, where they are members of Central Baptist Church. They have two adult sons – Will and John. John and his wife Aimee blessed them with two granddaughters.