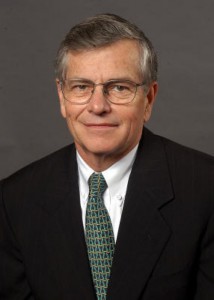 When Tom Craddick was 25 years old, he decided to seek office in the Texas House of Representatives as a Republican from his hometown of Midland. At the time, Texas was a one-party state, and many thought him foolhardy. His father, R. F. Craddick, warned the young Ph.D. student at Texas Tech University against it. “Texas is run by Democrats,” he told him. “You can´t win.” But Craddick proved his father and many others wrong, and was elected as one of only nine Republicans in the 150-seat House.

His tenure has been characterized by landmark events. His initial years at the Capitol were focused on revitalizing the Texas GOP, but in 1971 he gained respect from both sides when he joined a bipartisan group of reformists dubbed “The Dirty 30” that was pushing for changes in House Ethics. In 1975, Speaker Bill Clayton appointed Craddick as the first Republican committee chairman in 100 years, and he continued to hold chairmanships under Clayton´s successors, Gib Lewis and Pete Laney.

On January 11, 2003 he made state history when, subsequent to his 34-year tenure in the Texas House of Representatives, he became the first Republican Speaker—after helping gain the Republican Majority in the House-for the first time in more than 130 years.

Craddick served as speaker from January 2003 – January 2009. During that time, Texas went from a $10 billion budget shortfall to a $10 billion budget surplus. The legislature passed landmark tort reform which reduced frivolous lawsuits and reversed skyrocketing medical liability insurance costs, resulting in more doctors moving to Texas and expanding access to care. The legislature also passed the largest property tax cut in Texas history under Craddick´s watch, and reformed a school finance system that had been ruled unconstitutional by the Texas Supreme Court.

As Speaker, Craddick demonstrated an appreciation for diversity and bipartisanship by appointing a record number of women and minorities — including 12 Democrats — as chairmen.

Craddick is also a successful businessman. He is a sales representative for Horizon Mud Company, owns Craddick Properties, a Midland investment business, and is president of Craddick, Inc.

Craddick holds both a Bachelor of Business Administration and a Master of Business Administration from Texas Tech University. Craddick married the former Nadine Nayfa, a native of Sweetwater, in 1969. They have two children, Christi and Thomas Russell, Jr. Their son, Tommy, married the former Laura Parker in 2004. Craddick and Nadine have a grandson, Tripp, and two granddaughters, Claire and Catherine.