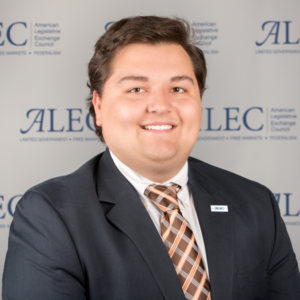 Wes Fisher is the Manager of Membership and Development at ALEC,  working with ALEC state chairs, legislative members, and donors. He grew up on the outskirts of Northern Virginia in Fauquier County and graduated from the best college in America, James Madison University, in 2016 with a degree in Political Science and Communications.

While at JMU, he was involved heavily in Virginia politics, staffing several political campaigns and local government offices, which led to a passion for state politics that led him to ALEC.

Wes is a lover of dogs, sports, the outdoors and is an avid football fan but unfortunately spends most of his time rooting for the Washington Redskins.