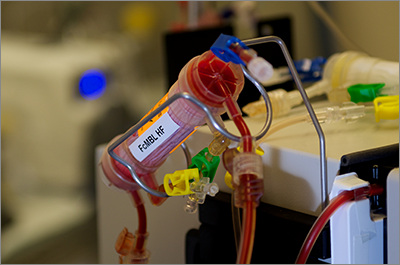 More people in hospitals die from sepsis and septic shock than from breast or lung cancer. Currently, there is no known cure for sepsis—something researchers at Harvard’s Wyss Institute are trying to change.

Hospitals and doctors often treat sepsis patients with a wide range of antibiotics, intravenous fluids, and oxygen. Because sepsis can have a number of underlying causes, conventional treatments tend to be limited in scope and efficacy. For example, antibiotics, while they may be effective, can cause additional problems. If the underlying cause of a patient’s sepsis is a bacterial infection, the antibiotics will kill the bacteria. The dead bacteria, though, will break apart, leaving toxins in the patient’s blood stream.

This is where the device under development at Harvard’s Wyss Institute comes into play. The device runs a patient’s blood through a hollow, microfiber cylinder similar to filtering cylinders used with dialysis machines. The microfiber cylinders have been coated with a special, genetically engineered blood protein that captures both the pathogens causing the infection and the chemicals a patient’s body creates to combat the infection.

Particularly interesting is the ability of the researchers to develop a product that does not require a treating physician or hospital to identify the specific source of the underlying infection. The genetically modified protein in the cylinder is able to intercept and remove the pathogens and reactionary chemicals regardless of the type of infection. This means that the device, if researchers are able to obtain the appropriate approvals, will complement traditional treatments, such as antibiotics.

While the device has not yet been tested on humans, researchers have successfully removed multiple sources of infection from the bloodstream of small rodents. Because of this success, they have moved to larger animals and hope to start human trials in the near future.

Such an innovative device has the potential to save hundreds of thousands of lives every year. It is encouraging to see researchers at Harvard’s Wyss Institute experiencing so much success in thinking outside the box of traditional treatments to address the underlying causes of sepsis.