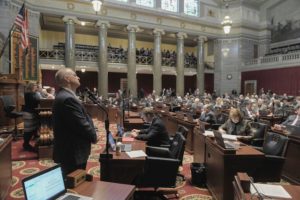 This week, ALEC and FreedomWorks introduce Missouri State Representative Bruce DeGroot. Rep. DeGroot represents parts of St. Louis County, including Chesterfield, in the Missouri House of Representatives. He was first elected to the House in November 2016 after a long history of serving the community of Chesterfield. Prior to serving in the house, Rep. DeGroot served as a councilman for the City of Chesterfield. He is a former Trustee for the Chesterfield Farms Subdivision and has served as the Vice Chair and Secretary on the Planning Commission for the City of Chesterfield. He has also served on the Board of Variances and the Chesterfield Drug Task Force. Rep. DeGroot earned his Bachelor’s degree in 1987 from the University of South Dakota and his J.D. from Saint Louis University School of Law. He was born in Sioux Falls, South Dakota and is a descendent of Buffalo Bill. He currently resides in Chesterfield with his wife, Jill, and their three children—Regan, Cliff, and Thomas. Rep DeGroot and his wife are very proud of their three children.

As a practicing attorney since 1993, I have watched Missouri become the Trial Attorney’s courtroom of choice due to our favorable laws and judgments. We are now known as the “Sue Me State” instead of the “Show Me State”. I ran for office to implement long overdue tort reform.

The biggest issue facing Missouri is tort reform. Missouri’s economy has lagged due to excessive judgments and the feeling that Missouri is not business friendly.

If I could wave my magic wand, I would enact stricter venue laws. Trial attorneys across the nation have manipulated our lax venue statute to make Missouri home to virtually any lawsuit they file.

I currently serve on three committees, Utilities, Litigation Reform, and I am Vice Chair of the Judiciary Committee.

Last year, my first, I drafted, filed, and passed HB 339. This new law restricts abuse of agreements between trial attorneys and underinsured defendants. These agreements too often led to excessive, extra-contractual judgments.

ALEC and ALEC model policy are a great resource. ALEC was able to put me in touch with an expert who was willing to travel to Missouri to testify in support of one of the bills I filed, Asbestos Transparency Trust. Even more important are the people of ALEC. The staff members, like Amy Kjose and Ashley Varner, are always friendly and willing to help with any question or project I have.

I love to play golf. I’m just really bad at it. I’ve also never been to New Orleans, so I’m looking forward to the ALEC conference there this summer.