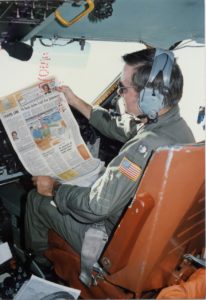 This week, ALEC and Freedom Works introduce New Hampshire State Representative Ken Weyler. Representative Weyler is serving his 15th term in the New Hampshire House of Representatives, first elected in 1990. He is a United States Air Force Veteran and worked as an Airline Pilot for American Airlines for over a decade. He attended MIT in Cambridge Massachusetts earning a Bachelor’s of Science. He is married and has three children.

I was on the town planning board and the regional planning commission. I went to the legislature to testify in favor of a bill that the two groups favored. From the questions that were asked, I decided that I knew more about the issue than the legislators questioning me.

In your view, what is the biggest issue facing New Hampshire?

New Hampshire tries very hard to keep the cost of government down. Surrounding states keep trying to push us towards income and sales taxes to reduce our advantage of having neither. The present Wayfair decision by the Supreme Court will give us another challenge.

I have served on the New Hampshire House Finance Committee since 1994. This committee sets the State Budget and I was chair of the committee in 2011-2012 when we cut the budget by 10%.

I am most proud of my work on school choice. Public Education suffers from the same thing that all monopolies do:  inefficiencies and continuously increasing budgets. I have been the champion of charter schools for over ten years, and am working hard on education choice.

My membership at ALEC has been instrumental in giving me the tools and advice to be an effective legislator. My membership on the Tax and Fiscal Policy Task Force has given me many ideas for improving my state’s budget.

What is your favorite thing about New Hampshire?

By being dominated by small towns rather than cities, New Hampshire, with 400 members in the NH House, is closer to the people than any other legislature. We are run by volunteers in many aspects of government. This reduces the influence of bureaucrats.

The Fourth of July is a favorite holiday for me; not only because it celebrates independence, and we have fireworks, but I get to pick my raspberries, my favorite fruit.