Taxes Do Matter to Migration

The Center for Budget and Policy Priorities (CBPP) recently released a new study that purports to show that state taxes have a negligible effect on the decisions of Americans to migrate from one state to another. The study criticizes research done by Dr. Arthur Laffer, Stephen Moore and Jonathan Williams in the yearly publication Rich States, Poor States: ALEC-Laffer State Economic Competitiveness Index and other publications that arrive at the conclusion that states should seek to adopt competitive tax and fiscal policies as a way of promoting economic growth.  The author of the CBPP report fundamentally misinterprets what the data really means and/or grossly misrepresents the actual position taken by advocates of lower state taxes. For the 43 million Americans who have moved between the states from 1992 to 2011—bringing $2 trillion with them—economic policy frequently was a major factor.

It is worth pointing out that years of research shows that citizens move based on taxes—and more broadly—economic policy. States with better public policy see higher job growth, higher gross state product growth, and higher migration. Businesses relocate to states with better economic climates and are able to hire more workers when they have more money left over after taxes, regulatory compliance, and legal compliance. That means that citizens looking for a job or higher pay will generally flow to free market states that have enhanced economic competitiveness. Looking at the performance over the last decade of the top and bottom 10 states from this year’s Rich States, Poor States demonstrates this migration trend: 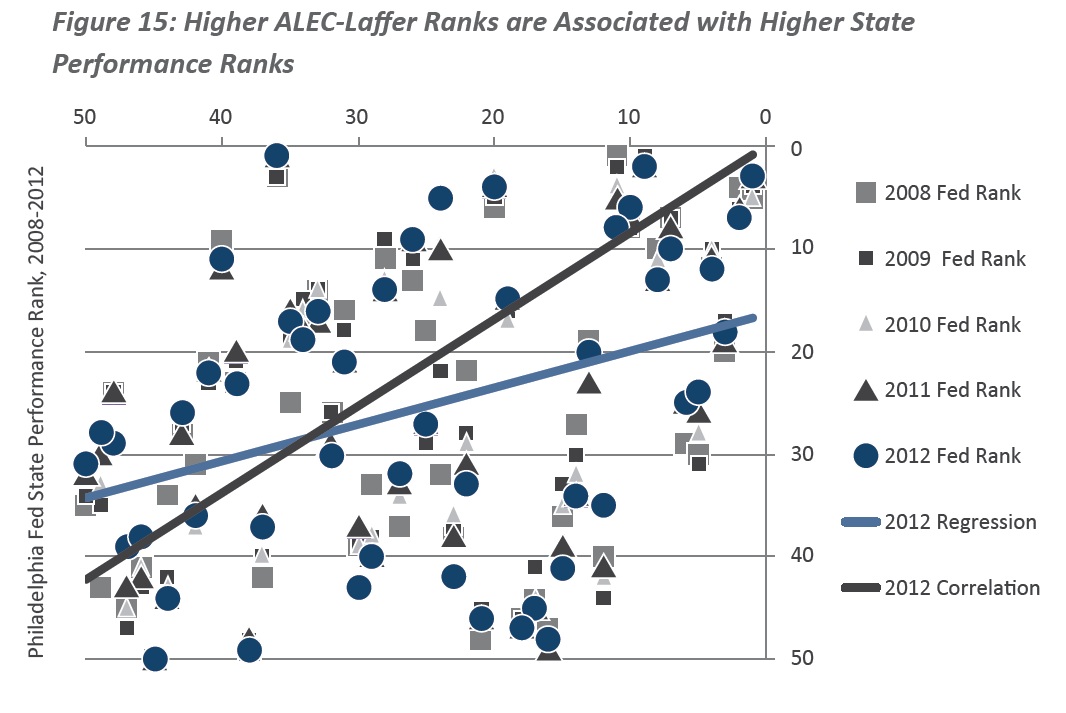 Several key points can be made about why the CBPP report conclusion does not follow from the author’s premise. First, just because high taxes were not cited as the primary reason to move to another state does not mean that taxes were not taken into account and considered among various other factors. Second, even the author of the CBPP study acknowledges there are indeed cases where people move from one state to another primarily for tax purposes. Take an individual moving from California to Texas: higher income earners stand to pay no income tax instead of a top marginal rate of 13.3 percent. Third, the CBPP conclusion tremendously mischaracterizes the position of those who advocate for lowering state taxes.

To paraphrase the core arguments made in Rich States, Poor States:

1)    Incentives matter: people will generally act in their own best interest

The data shows that people will move to a state if they have reason to believe they will have better opportunities in that state, and an economic climate that is conducive to greater economic growth includes competitive state taxes.

Even the CBPP author acknowledges this point, noting that, statistically, nearly a third of people report they are moving or moved for a job. The real question here should have been: Does having lower state taxes mean more economic growth and more jobs? The answer is an unequivocal yes.

The facts show that states with low taxes, especially low or no income taxes, consistently outperform their high-tax counterparts in terms of economic growth, which includes job growth and domestic migration. In addition to the table and chart above, the table below succinctly lays out a comparison between the nine states that have no income tax versus the nine states with the highest income taxes. Clearly, the no-income tax states are doing far better than their high-tax counterparts. Public policy, including tax policy, matters to economic performance, which in turn matters to migration.

Other sources substantiate this claim as well. Dr. William McBride, chief economist at the Tax Foundation, performed a literature review on academic studies relating to the effect of taxes on economic growth. Almost all of them found a negative impact on economic growth due to taxes. Even a study from Christina Romer, formerly of the Council of Economic Advisors for President Obama, found that GDP is negatively affected by taxes. Predictably, the CBPP attempted to deny this point, but in a rejoinder, Dr. McBride thoroughly rebuts their work and shows unequivocally that the research consensus from economists is that taxes do affect economic performance. Travis Brown, author of How Money Walks used IRS data to track the migration patterns of Americans and found they are overwhelmingly moving to low or no income tax states from high tax states.

The CBPP author offers two alternatives to explain why it may appear that people are moving to lower tax states and out of higher tax states: weather and cost of living (particularly housing costs). Weather cannot serve as a sufficient explanation for why people choose to move—although it should not be inferred that weather is never considered when deciding where to move, certainly that factor is also considered—because if weather were the main motivation, then we would expect that California and Florida would both be booming. But in fact, of those two, only Florida is gaining population from other states. Florida, a no income tax state, has gained more than 1 million people on net from 2003-2012, second only to Texas (another no income tax state). Meanwhile, in that same time period, California, the state with the highest income taxes in the country, has lost almost 1.5 million people. Even if weather is a factor, it is clearly not the only thing at play and it is obviously not a factor that legislators can change.

As for the cost of living argument, the author of the CBPP report notes that many movers would be likely to save a great deal more on their mortgage than they would on their state taxes. However, if individuals would move to save on housing costs, common sense would also suggest that they would move to save on tax costs. Additionally, while the cost of living may be a factor, it cannot sufficiently explain the patterns of domestic migration. If this were the primary factor for moving, then people would presumably be flooding into downtown Detroit where housing prices have been a bargain for many years. Finally, this argument also ignores the significance of more free market zoning laws that allow for easier and cost effective property development. As even Vox’s Matt Yglesias has pointed out, restrictive zoning codes often lower housing supply, which in turn raises prices. Moreover, property taxes also affect the cost of renting a home since those taxes are passed along in rent prices to consumers. Notably, even when looking at housing prices, we see that government policy does affect where people migrate, even if indirectly.

The CBPP report ultimately fails to prove what it sets out to explain: that taxes don’t matter to Americans’ interstate moving decisions. The author’s various arguments for why we see the moving patterns that we do lack sufficient explanatory power to reject the conclusion that taxes matter for domestic migration, even if indirectly.

As Rich States, Poor States has documented, there are years of data demonstrating how low-tax states are far more conducive to economic growth than their high-tax counterparts. Economic growth means more jobs and more opportunity, and we know that people move for better jobs and better opportunity.