Representative Seth Grove: Legislator of the Week and Year 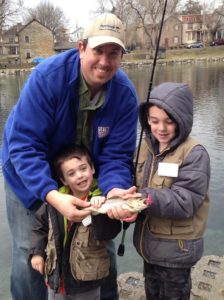 This week, ALEC and FreedomWorks are proud to introduce Pennsylvania State Representative Seth Grove. Representative Grove is not only this week’s Legislator of the Week, he was also awarded the 2017 Legislator of the Year at the ALEC States and Nation Policy Summit in Nashville, TN. Representative Grove has been a champion for fiscal restraint in Pennsylvania. As founder and Co-Chair of the Pennsylvania Taxpayers’ Caucus, he regularly partners with ALEC and promotes sound fiscal policy. For years, Representative Grove has been a leader for taxpayers – opposing tax increases proposed by both parties. This year alone, he has warned against gross receipts taxes and severance taxes, which would have hurt the state’s business climate and consumers. He is part of the State and Fiscal Policy Task Force and was instrumental in the latest Unaffordable Unaccountable publication showing the unfunded liabilities of state-administered pension plans. Rep. Grove resides in Dover with his wife, Kacey and their sons, Andrew and Connor.

Why did you become a state representative?

I decided to run to stop the normal status-quo, Republican answer to every solution: incrementalism and water it down even more.  These types of policies have not advanced Pennsylvania.  Actually, I would argue they have held back Pennsylvania from becoming an economic powerhouse.  We need big ideas and big changes to compete with other states and other nations.

Now that you have made strides in PA fiscal reform, what is next up on the docket?

We have a long way to in Pennsylvania.  We still need to contain our cost drivers, update our budget process, and remodel our government to focus on private sector job growth.  The goal is always to take out the #1 state in Rich States, Poor States. Pennsylvania has the natural resources, the location and the skilled workforce to be a top-tier economy.  We just need to remove the state government policies holding us back.

You were recently in DC for a panel on eliminating the state and local tax deduction, are you happy with the results in the federal tax bill?

Yes, very pleased.  Ultimately it would be a negotiation, but the important aspects of tax rate reduction were accomplished.  While SALT was curbed, I think we won on the merits of it subsidizing high tax states and state/local tax increases are treated like simple federal tax deductions.  We were able to successfully interject free market arguments on a national policy, which every American will benefit.   Every member of ALEC should be proud of our leadership team and dedicated employees of ALEC for putting this organization in a position to effectuate pro-growth policies at the national level.

How has ALEC helped you become a better state representative?

ALEC has proven to be a critical resource for networking, best practices, and listening to success stories from other states which have focused on policies which limit government, increase free markets, and return power back to the states.  It is hard to argue the results of policies which create more free markets, limited government and return power back to the states when you are armed with the empirical evidence from states which have adopted these policies.

What is a fun fact that is not in your professional bio?

We have two boys, Andrew (8) and Connor (5).  When Andrew was a few years younger I used to bring legislation home and read it to him.  At age three he was quite an expert in property taxes and tax policy in general.  At one point, he and his mom went out to lunch.  I asked him how his lunch was and he responded, “Dad, it was a business meeting and we discussed the cumulative effect of the budget.”

I have given up on New Year’s Resolutions.  I prefer to just pledge to be a better wrecking ball to socialist policies.