Spending Growth and Volatile Revenue Trouble in the Treasure State

Montana’s fiscal well-being suffers from two problematic trends: a highly volatile tax structure and a propensity to increase spending. These trends are largely to blame for the projected $227 million shortfall in the state budget. As the legislature meets for a special session to address these trends, rather than patch the problem with tax increases or accounting gimmicks, Montana should consider serious structural reforms to taxes and spending.

Just how volatile is the state’s tax structure? Overall, Montana collects more than 70 percent of its tax revenue from fickle sources (corporate income taxes, individual income taxes, selective sales taxes and severance taxes) while forgoing a general, broad-based sales tax. For example, selective sales taxes, such as taxes on cigarettes, tobacco and alcohol, make up more than one-fifth of total tax collections—these sources are discriminatory in nature and subject to decline over time. The state also relies on severance, such as taxes on oil, natural gas, and coal extraction, and income taxes, which are all subject to cyclical changes in the economy. This volatility makes accurate revenue forecasts difficult, and directly contributes to budget troubles. 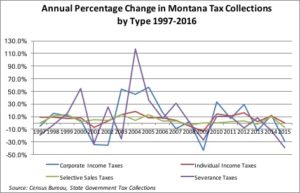 Governor Bullock proposed an approach that includes raising the rates of these volatile taxes to boost revenue. Unfortunately, these proposals—including the idea of a high income earners tax—would heighten volatility. The annual ALEC publication Rich States, Poor States demonstrates that states with higher tax rates and income tax progressivity consistently underperform on economic outcome measures such as growth in GDP, jobs and population compared to states with less progressive taxes. And proposals to expand discriminatory taxes to other products, such as medical marijuana and e-cigarettes, would continue the revenue instability inherent in current discriminatory taxes.

Increasing the rates within the existing tax structure will further exacerbate volatility and do little in the way of stabilizing revenues. Gaining needed revenue stability requires the replacement of volatile revenue sources with a consumption-based system, such as the retail sales tax applied to a broad base of final goods and services.

While crafting a more reliable, equitable tax code would help address revenue instability, the legislature also desperately needs to adopt priority-based budgeting to rein in a pattern of profligate spending. Over the past 20 years, population and inflation in Montana have grown at a combined 69 percent; however, over this same period, general fund expenditures and other state expenditures have grown by a combined rate of 150 percent. This growth measure indicates that government is expanding more than twice as fast as population and is thus taking up an increasingly larger share of Montana’s economy. 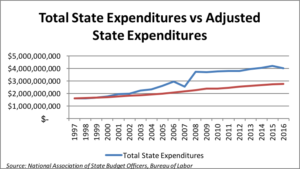 The ALEC State Budget Reform Toolkit outlines more than 20 policy solutions available to state lawmakers that would help reduce both unnecessary spending growth and uncertainty in the budgeting process. These include:

Montana currently follows some best practices, such as the state’s balanced budget amendment and the governor’s line-item veto authority for budgets. But priority-based budgeting is the solution to the recurring fiscal straights faced by legislators. A full embrace of the innovative strategies provided in the State Budget Reform Toolkit  would  better equip Montana to provide core government services without damaging tax increases or budget gimmicks.