In an article titled “America’s Public Pensions Are Stuck In The Clouds,” The Wall Street Journal cited data from the recent ALEC publication, Unaccountable and Unaffordable 2018. 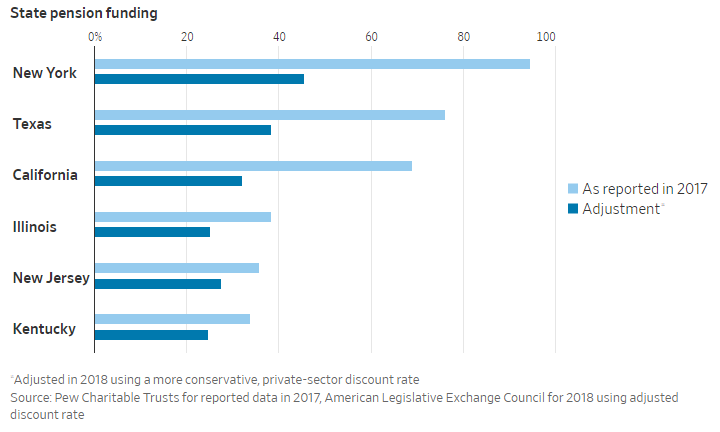 To get a sense of how meaningful a shortfall could be, consider the California Public Employees’ Retirement System, known as Calpers. Its forecasts are on the cautious side compared to peers, yet it still assumes a return of 6.1% annually over the coming decade from a portfolio 50% in public equities, 8% in private equity and 28% in fixed income. Its own calculations show that a 1 percentage point change in its assumed discount rate would reduce its funded level by 8 or 9 percentage points, increasing its funding gap by around $30 billion or around $2,600 per California household.

Asked how it arrived at 6.1%, Eric Baggesen, a Calpers managing director, mainly credits outside consultants. He acknowledges that they might have an optimistic bias.

Using more reasonable investment expectations from ALEC (which uses a realistic adjusted discount rate), it becomes clear that the funding gap in state pension systems is much worse than many realize. ALEC’s annual Unaffordable and Unaccountable report aims not only to raise awareness about the severity of this crisis but also to promote legislative solutions that will put Americans back in control of their retirement savings.

Read the full article in The Wall Street Journal.