Today was a rough day for global financial markets. The Dow Jones Industrial Average plummeted more than 1,000 points before recovering some of the lost ground. All told, the Dow lost more than 588 points for the day. However, the Dow’s 3.5 percent drop pales in comparison to China’s 8.5 percent drop for the day. Global markets appear deeply concerned that China’s economy will enter a recession and may imperil Western economies that are major trading partners with China, such as the United States. It’s unclear whether this financial instability will turn into broader macroeconomic instability—the hope it that markets will rebound and the financial instability will not spill over from Wall Street to Main Street. But given the ever-present possibility of entering a recession or a period of substantially stagnant growth, this so-called “Black Monday” should provide a wake-up call for policymakers to reconsider how current economic policies may be harming our economic competitiveness.

At the federal level, the United States is suffering from a competitiveness deficit. Apart from numerous job-killing rules and regulations coming from Washington, our corporate tax rate is now the highest in the developed world. It comes as no surprise that our tax code is in dire need of repair and reform when iconic American companies like Burger King decide to “invert” and move their headquarters to another country in order to benefit from lower taxes. ALEC recently joined a broad coalition spearheaded by the National Taxpayers Union to highlight the need for “ a coherent, simpler, fairer tax code for individuals, small business, and corporations as part of a broad national strategy to ensure long term competitiveness.” Of course this summary just scratches the surface on needed reforms.

Apart from the pro-growth market reforms needed at the federal level, below are five things state policymakers should consider to protect their states from a potential financial and economic downturn.

Some taxes are much more sensitive to economic movements then others. Taxes on corporate income and personal income, particularly the portion paid by “pass-through” businesses filing in the personal income tax code and taxes on investment income, are extremely volatile relative to taxes on consumption such as sales taxes. Consider this chart from the 7th Edition of Rich States, Poor States: 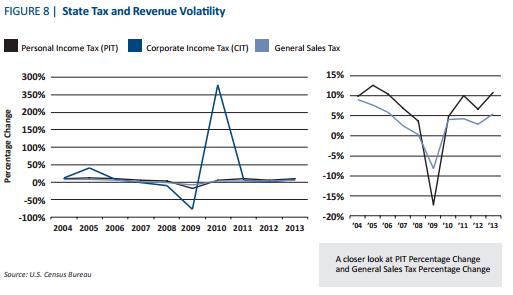 Shifting state revenue collection away from wage income, investment income and business income ensures that when an economy enters recession characterized to a drop in wage income due to wide-spread unemployment, depressed business revenues, and investments with negative returns, gross state tax returns have a softer decline. In short, though consumption falls in a recession, it falls far less than the various forms of income tend to drop, meaning taxes based on consumption decline less in a downturn than taxes the various forms of income.

In addition to ensuring stable revenue by picking a stable tax regime, states should maintain discipline on the spending side of the fiscal ledger. Often during recessions, “non-discretionary” state spending increases dramatically. In preparation for economic instability, states should maintain a conservative rainy day fund, structural budget surpluses and conservative state spending levels with reasonable budgetary growth. These safeguards allow a state to have ample fiscal slack in times of recessions.

One important step in ensuring sound fiscal practices involves moving to priority-based budgeting, which is detailed along with other important fiscal reforms in the ALEC State Budget Toolkit. This approach calls on a legislature to establish the core functions of government and spends only on those areas only government can and should uniquely perform.

Federal funding is a major part of every state’s budget, particularly non-discretionary spending. Those spending programs tend to increase in a recession and with it, federal funds transferred to states. Moreover, state reliance on federal spending often increases in a recession, when the federal government tends to inject fiscal stimulus into state coffers. But the states cannot rely on that spending, because future support from the deeply indebted federal government is uncertain at best. To protect against the risk of unexpected federal fiscal changes, states should engage in sound contingency planning for what the state would do in various scenarios of unexpected federal policy action.

States like Utah have established Financial Ready Utah, and ALEC model policy on a Federal Funds Commission reflects those best practices (additionally, ALEC has model policy on state dependence on federal funds and the need to reduce it). States should plan for worst-case fiscal scenarios in a downturn with strong contingency plans for unexpected changes in federal non-discretionary spending and unexpectedly low federal stimulus.

States that rely on defined-benefit pension plans, even under the most responsible pension funding and investing practices, face the possibility of a major decline in economic downturns. Consider the case study of Utah in 2008 at the beginning of the Great Recession. As the ALEC publication, Keeping the Promise: State Solutions for Government Pension Reform, observes:

“To offer a real world case, consider what happened in Utah. The state’s pension fund lost 22 percent of its value in 2008. It made a 13 percent return in 2009. Public employee unions cited the 2009 returns as evidence that the state was more than halfway out of its trouble. After all, 13 is more than half of 22. But the 22 percent loss actually led to a 30 percent gap between where the fund should have been and where it was. It was expected to have earned 7.75 percent in 2008. Instead, it ended 2008 far behind where its managers had called for—29.75 percent down, to be precise. To make up for loss, the pension fund would have had to generate a 68 percent return in 2009.”

Note Utah was a state that generally practiced strong fiscal responsibility with their pension plans. Once the effects of past recessions, imprudent investing and rampant underfunding are summed, state public pensions already stand at a staggering $4.7 trillion shortfall, according to State Budget Solutions. Worse, another recession ravaging investment returns will deepen this shortfall.

States can guard against this by turning their defined benefits plans into 401k-style defined contribution plans. This ensures states responsibly fund employee retirement plans at the full level every fiscal year and taxpayers are not forced to bear the entire brunt of all macroeconomic events.

To the extent states don’t take this important step, they should at least be sure that they select an investment target each year that is fiscally responsible. The more return a state chases, the higher risk it faces in a financial downturn. Moreover, accepting high risks can lead to plan underfunding when risk materializes in losses. This may force pension funds to chase even higher returns to make up for losses and therefore accept even greater risk. Moreover, pension fund boards should embrace a Prudent Investor Rule that ensures fund managers focus on maximizing investment returns, rather than bowing to political motivations and pressure.

Given states have little ability to affect the underlying macroeconomic causes of many recessions or engage in traditional macro-stabilization efforts once a recession begins, one may incorrectly conclude state policymakers are left with few options in a recession. Of course, that assumption ignores the importance of pro-growth economic policies cultivating a strong economy before a downturn, shielding a state from the major downsides and speeding up the economic recovery, post-recession.

Rich States, Poor States details many important fundamentals to embracing economic growth. As we have noted, states that embrace these policy recommendations have higher preforming economies (see here and here, as well as chapter 3 of the 7th edition of Rich States, Poor States). Moreover, embracing other important policies like strong growth in American energy extraction or reforming occupational licensing can have major impacts on economic growth, increasing incomes and entrepreneurial activity. ALEC has a massive cache of model policy directed towards the goal of a more open and market friendly economy that maximizes human potential and unlocks growth.

The bottom line is what state policymakers have control over is their economic climate, which they can ensure is consistent with greater economic performance. Such moves make for a softer landing in a recession and a quicker rebound afterwards. There is no time better than the present, or in anticipation of a recession, to work towards super-charging state economic performance.