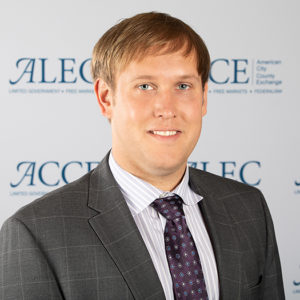 Grant directs the ALEC Task Force on Energy, Environment and Agriculture. He came to ALEC from Americans for Prosperity (AFP) where he worked on the organization’s state energy portfolio. He believes that energy policy is done best when there is competition and government refrains from picking favorites.

A Virginia native, Grant has spent his whole life in the state. He grew up in outside Washington D.C. and earned his Bachelor’s Degree in Political Science from James Madison University. After undergrad, he returned to the DC area and took a job as a policy analyst working on energy issues. While working, he also attended George Mason University earning a Master’s Degree in Economics.

In 2017, Grant participated in the Sorensen Institute’s Political Leaders Program. The program brings together a diverse group of people interested in Virginia politics. As part of the program, he drank a beer with the Governor of Virginia, toured a coal mine 2,000 feet underground, and meet dozens of elected officials across the state.