Plug-in electric vehicles have seen a growth in market share over the past decade. Some consumers are attracted to their green reputation, and states are subsidizing sales through various incentive programs. While plug-in electric vehicles are the most common alternative fuel vehicle, they are not the only type on the market. Recently, Honda, Hyundai and Toyota introduced hydrogen fuel-cell vehicles to their 2020 line-ups.

Interest in hydrogen fuel-cell vehicles has been accompanied by new state legislation. ALEC opposes the government picking winners and losers and has model policy against specific mandates to encourage alternative fuel use. We also report on policies being introduced in states. Since 2019, 14 states have introduced bills relating to hydrogen fuel-cell vehicles. These bills can be described by five categories: State Procurement, Sales Mandates, Incentives for Consumers, Incentives for Producers, and Infrastructure. 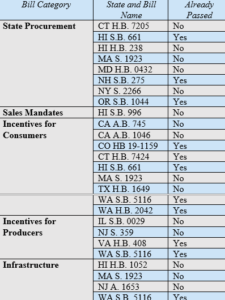 State Procurement: This type of legislation centers on state government requiring the purchase of zero-emission vehicles by the state. Such bills include Connecticut’s H.B. 7205, Hawaii’s S.B. 661 and H.B. 238,  New York’s S. 2266, and Oregon’s S.B. 1044, of these Hawaii’s S.B. 661 and Oregon’s S.B. 1044 passed. Massachusetts S. 1923 and Maryland’s H.B. 0432 have proposed that all vehicles purchased after a certain date be zero-emission. New Hampshire went further to propose in S.B. 275 that all state-owned vehicles must be zero-emission by the year 2039.

Incentives for Consumers: Many states have used tax incentives or rebate programs to encourage consumers to purchase zero-emission vehicles. California’s A.B. 745, Colorado’s HB 19-1159, Texas’ H.B. 1649, and Washington’s S.B. 5116 and H.B. 2042 have proposed tax exemptions or incentivized tax rates for hydrogen fuel-cell vehicles. Of these, Colorado’s HB 19-1159, Washington’s S.B. 5116, and Washington’s H.B. 2042 were passed into law. California’s A.B. 1046, Connecticut’s H.B. 7424, and Massachusetts’s S. 1923 have proposed the creation of rebate programs for zero-emission vehicles, of which only Connecticut’s H.B. 7424 became law. Hawaii’s S.B. 661, which became law in 2019, took a different approach, giving hydrogen fuel-cell vehicles benefits such as parking fee exemptions and high occupancy vehicle lane use when the.

Incentives for Producers: States have also introduced bills which focus on incentives for the manufacturers and factories that produce hydrogen fuel-cell vehicles. Illinois’ S.B. 0029, New Jersey’s S. 359, Virginia’s H.B. 408, and Washington’s S.B. 5116 proposed tax or investment incentives to the creation of green jobs, including jobs which relate to hydrogen fuel-cell vehicles. Of these, Virginia’s H.B. 408 and Washington’s S.B. 5116 became law.

In comparison to other alternative fuel vehicles, hydrogen fuel-cell vehicles have potential advantages should the technology develop to reach commercial scale. Hydrogen refueling takes less than five minutes, which is significantly less time than it takes to fully charge a plug-in electric vehicle.  Hydrogen fuel-cell vehicles also have a longer range (more than 300 miles) than many plug-in electric vehicles (median range of 125 miles in 2018).

In terms of fuel costs for consumers, plug-in electric vehicles are also more advantageous than hydrogen fuel-cell vehicles. Hyundai’s NEXO Fuel Cell vehicle can travel as far as 100 kilometers (about 62 miles) per kilogram of hydrogen. At the most common price for hydrogen fuel of $13.99 per kilogram, this equates to a cost of nearly $0.23 per mile. A Tesla Model S, on the other hand, has a cost of about $0.05 per mile. However, price of hydrogen fuel may fall in the coming years to a predicted $8 to $10 per kilogram, making the new cost per mile $0.08 to $0.10, but this is an optimistic forecast. For comparison, traditional vehicles average 25 miles per gallon and pay around $0.09 per mile, given the average price of gasoline in the United States was $2.170 a gallon in June of this year.

Although the use of hydrogen fuels does not directly result in the production of greenhouse gases, the production of hydrogen fuel can release greenhouse gas depending on how it is produced. Hydrogen fuel is primarily sourced from fossil fuels, as noted by the Department of Energy’s Office of Energy Efficiency and Renewable Energy. However, this can also be said for plug-in electric vehicles charged using grid electricity, which is generated primarily by the use of fossil fuels. However, renewable sources produce hydrogen as well, giving hydrogen fuel the potential to be produced in a way that doesn’t release greenhouse gases.

As for the initial cost of vehicles themselves, the average cost of a new car was $37,876 in February of 2020 – a 2.6% price increase from February 2019. Plug-in electric vehicles had a higher average cost of $40,850 in February 2020 before incentives, however, these vehicles have seen a price decrease of 0.4% since February 2019.  The 2020 Hyundai NEXO Blue, 2020 Honda Clarity Fuel Cell, and the 2020 Toyota Mirai all have MSRP’s of over $57,000. Since the market share is so limited, it is unclear on how much consumers actually pay for these vehicles, but it is fair to say they are more expensive than both traditional vehicles and electric vehicles.