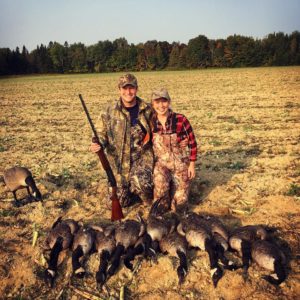 This week, ALEC and FreedomWorks introduce Maine Representative Trey Stewart. Rep. Stewart is serving his first term in the Maine House of Representatives in the 147th district encompassing most of Presque Isle. He is now the youngest legislator currently serving in the Maine Legislature. He is a recent graduate of the University of Maine where he majored in Political Science and Sociology and minored in Business Administration and Legal Studies. Rep. Stewart has been appointed to serve on the Education and Cultural Affairs Committee during the 128th Legislature.

I chose to run for office my senior year of college because I was looking forward to moving back home to Northern Maine, but it wasn’t the same place I remembered it to be. I didn’t feel like the current representative I had representing my hometown was doing his job very well, so I decided I would run against him while I pursued my graduate degree to try to change that and revitalize the Northern Maine economy. In order to do that, we needed new ideas and fresh faces in the state House, and I knew I could do the job.

In your view, what is the biggest issue facing Maine?

By far, the biggest issue facing Maine is the loss of our young people. We are losing our workforce because young people and young families are moving south or out of the state altogether, which is disproportionately harming rural Maine more. We need young people to stabilize our local tax base, fill much-needed jobs, reduce our energy and healthcare costs, and contribute to our society. Without young people, rural Maine will continue on its current downward trend, both economically and culturally.

If you could “wave your magic wand,” what would you like to see immediately implemented in Maine?

If I could “wave a magic wand,” I would like to see policies immediately implemented that incentivized rural economic development and attracted young people to rural parts of the state to help grow our economy and communities.

I serve primarily on the Education and Cultural Affairs Committee, where I worked hard on meaningful education reforms throughout our budget process. I also was able to provide the perspective of a current student in higher education, as I achieved an MBA while serving in my first term. As the youngest member of the legislator, I was able to provide the most recent perspective on public education in Maine, as well as higher education through our public university system. I also served on the Opioid Task Force, where we worked for 9 months to provide bi-partisan recommendations to the whole legislature to address the opioid crisis that’s claiming more than one Mainer each day. This is a particularly bad issue in my part of the state, where we have been impacted harder by the crisis, so the fact that I was the only person on the Task Force from Northern Maine was critical to be able to provide the perspective of a rural community dealing with the issue.

My most proud moment last session was when I was able to get a bill through with broad bipartisan support to reform our welfare system. The bill incentivized people to get off of welfare and move towards independence. All too often, the system in Maine becomes more of a trap than a safety net, and a new and innovative approach to this issue (and many others) are what is necessary to help move the needle towards economic growth and prosperity for all in our state.

I have greatly relied on connections I’ve made with like-minded individuals in other state legislatures.  The ability to travel around the country, experience what different states have to offer, and exchange ideas with other young and motivated legislators from other states has been invaluable to me as a freshman legislator. I look forward to staying involved with ALEC and growing as a legislator alongside my fellow ALEC colleagues from around the nation.

What is your favorite thing about Maine?

I love that Maine still feels like “home.” No matter how great the experience, the best part of any trip is crossing the line into The County on I95 North and being surrounded by nature on all sides.  It’s safe, inviting, clean, friendly and welcoming and is the greatest place on Earth to raise a family and grow up as a kid. Things move a little slower up here, but the life lessons you can learn in rural Maine will stay with you wherever you go, and it will always be waiting for you when you decide to come “home.”

I recently completed the Trek Across Maine, which is a three-day 180-mile bike ride from the mountains of Western Maine to the East Coast to raise money for the American Lung Association. Our little area in Northern Maine had over 60 bikers and raised $35,000 for cancer research this year, which was outmatched only by teams with corporate sponsorships. Not bad for an organic and homegrown effort!