Late this past week, ALEC members converged on the historic southern town of Savannah, Georgia to attend the 2015 Spring Task Force Summit. Before participating in task force meetings on Friday, 32 ALEC members, spouses and staffers spent Thursday afternoon touring the Port of Savannah.

Operated by the Georgia Ports Authority (GPA), the port is the second busiest U.S. container exporter and the fourth busiest in the country, overall. For a variety of reasons, including strong relationships with labor groups, geographic proximity to two major interstate highways and efficient processes, the port has grown significantly over the past couple decades.

ALEC members specifically toured the Garden City Terminal, the main terminal of the port. The 1,200-acre facility contains nine deep water berths, three million square feet of warehouse space, fifteen high-speed container cranes and storage space for containers as far as the eye can see. Norfolk Southern & CSX both also maintain railroads on terminal that can be used to ship goods around the country. 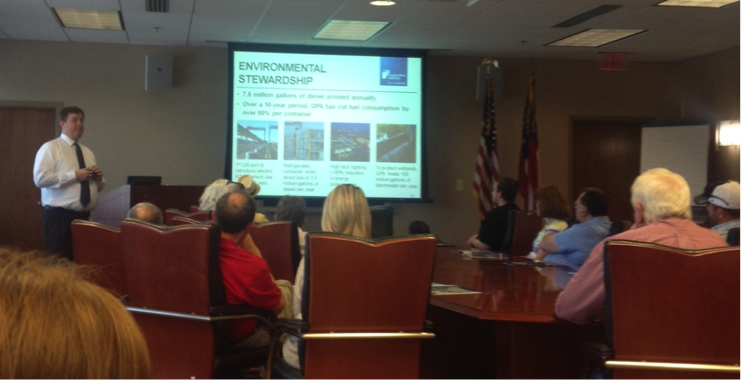 Following the tour, Port Authority staff welcomed ALEC members into their administrative building where they spoke in greater detail about operations of the port and plans for future expansion. For instance, plans to dredge the Savannah River channel even further to accommodate larger ships have met significant amounts of red tape related to endangered species protection and other environmental concerns.

As scores of enormous container ships continued to float along the Savannah River adjacent to the ALEC conference hotel the rest of the week, it was hard to not have a tremendous amount of appreciation and respect for the work that the men and women of the Port of Savannah perform every day.