For the first time in just over a decade, the U.S. House of Representatives today will vote on a bill to abolish the death tax, otherwise known the federal estate tax. H.R. 1105—the “Death Tax Repeal Act of 2015″—has bipartisan support, which is evident by its co-sponsors: Congressmen Kevin Brady (R-Texas) and Sanford Bishop (D-Georgia).

Attempts to repeal the federal death tax acknowledge what the 32 states without a death tax already understand: a tax on an individual’s personal property, business assets and investments, even with a $5 million exemption, results in high compliance costs, little revenue and bad incentives.

The reasons to reject this tax are abundant and the arguments in its favor are quite slim. Aside from the fact that a 70 percent of Americans oppose the death tax, the tax also brings in almost no revenue. According to Congressional Budget Office and the Office of Management and Budget, the death tax contributes $20 billion to the over $3.2 trillion in anticipated federal tax revenue—less than 1 percent of the federal budget.

The death taxes, which largely aims to redistribute wealth, has been ineffective in that goal because the extremely wealthy can afford the teams of lawyers and accountants to legally structure their estate in order to avoid the tax. The tax instead places most of the burden on farmers and small businesses. Farmers and small business—often family owned and operated—are very susceptible because they are “asset rich” and “cash poor.” As result it hurts the small business owners who must liquate their scarce capital to either to pay the death tax or afford lawyers. As the Tax Foundation points out in a recent study, three separate studies find that these compliances costs are larger than the revenue actually taken in by the death tax.

Moreover, the hidden costs to the economy are staggering, as we noted in a previous blog post:

Death taxes create a major disincentive to save and the effect of that disincentive is substantial. A study authored by Lawrence Summers, the former head of President Obama’s Council of Economic Advisers and the Treasury Secretary under President Clinton, found that the death tax had lowered the total capital stock by over a trillion dollars. The capital stock can be defined as the total value of durable assets in an economy that aid in production. It is the machines, factories, tools, computers, software, and technical know-how (i.e. human capital) that aid in the production of goods and services. It’s hard to put a clear human price on such an economic consequence, but given that capital accumulation is the major driver of technological advancement, lower prices to consumers for goods and services, competitive firms that are able to expand hiring, and increasing wages of workers by improving labor productivity, it’s safe to say that each and every American, along with citizens of the world, is worse off as a result of the death tax.

A Tax Foundation report projects elimination of the death tax would grow the economy by 0.8 percent (or $137 billion in today’s dollars), create 139,000 jobs, increase private business hours by 0.1 percent, and increase wages by 0.7 percent.

As the federal government has stalled the last decade on ending the disastrous federal death tax, the states have moved forward in abolishing and reforming their state death tax codes. Only 19 states maintain a death tax, with Tennessee’s scheduled for repeal. Since 2010 Indiana, Ohio, and North Carolina have repealed their states’ estate tax, in addition to Tennessee scheduled repeals of its estate taxes. In 2014 a substantial number of states reduced and reformed the burden of their estate or inheritance taxes including New York, Rhode Island and Maryland. New Jersey has also been considering reform. This is of little surprise since state death taxes bring in so little revenue, as a previous ALEC blog has noted: 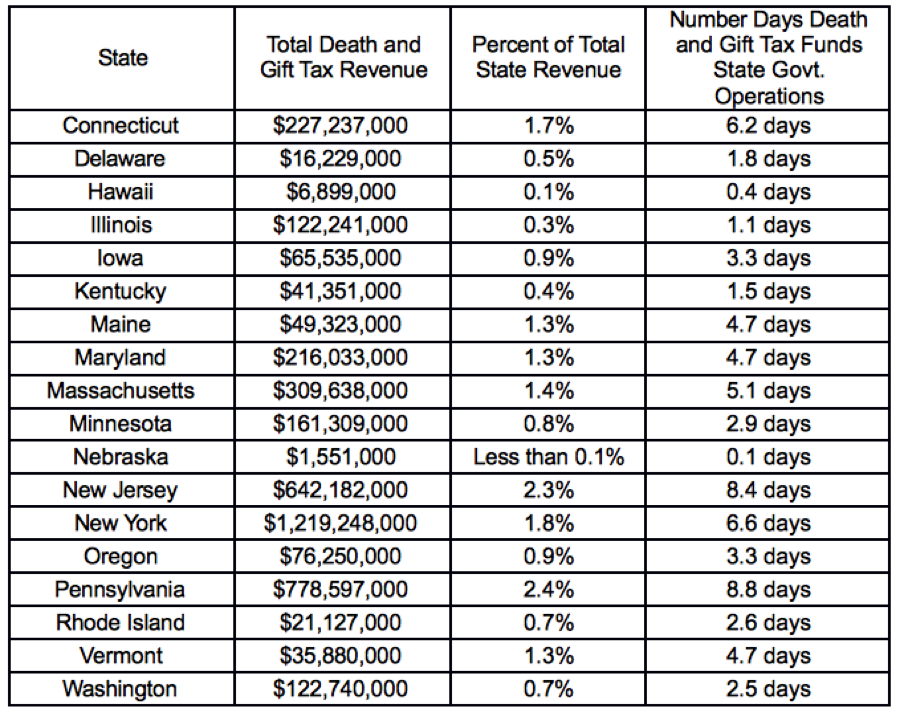 It’s only a matter of time till the death tax dies the death of a truly unjustifiable policy. We welcome that day given that the death tax is a bad tax, associated with huge costs and bad incentives, taking in almost no revenue and without rational justification.