Converting Pension Plans from Defined Benefit to Defined Contribution: The Myths and the Messaging Part 2

In part one, I discussed how policymakers can successfully message the issue of transition costs by pointing out some of the moral dilemmas created by defined benefit (DB) plan vesting requirements. This part will begin to lay out a course of action of how you deal with and explain the base fiscal issues of a move from a DB to a defined contribution (DC) plan in a way that will keep those directly affected and the average citizen both informed and comfortable with the concept.

Part one pointed out that DC plans have the full cost of employee budgets accounted for in current year budgets while DB plans often have hidden liabilities that emerge years in the future.  Today’s Unfunded Accrued Actuarial Liabilities (UAAL) are yesterday’s changes in actuarial assumptions, market decline, increase in lifespan and/or any of a number of unknown or known exogenous variables. In other words being even reasonably accurate on estimating the current cost of a DB plan is almost impossible. The net effect of these complicated mathematical equations is that DB plans have created a $6 trillion intergenerational transfer of debt.  DB plans with huge UAALs will be transferring ever greater resources from current needs to pay for benefits accrued in the past. This situation not only threatens the ability to plan for the future generations it may actually threaten the available revenues for services for those generations. DC plans remove the ability of current legislatures to pass on debt through the benefit programs of government employees to children and grandchildren of current citizens.

The transition costs associated with switching to a defined contribution plan often overlook or underestimate the time value of money- ironic given their tendency to overestimate it when calculating the liabilities associated with their defined benefit plans. The following chart shows what the cash outflow curve for benefit payments from a DB plan shutdown. Notice that the payments peak almost without exception in the 20 to 25-year range. At that point, the number of plan participants is shrinking as no new members enter and older members die. The approximate ‘lifespan’ of payments is around 65 years with a minute number of liabilities that are statistically irrelevant because of a basic financial commonsense — the present value of a dollar. It is well known that a dollar in a year is worth less than a dollar today so imagine the value of a dollar 40 years from now. At an annual discount rate of five percent a dollar today is worth over seven times its value in 40 years. 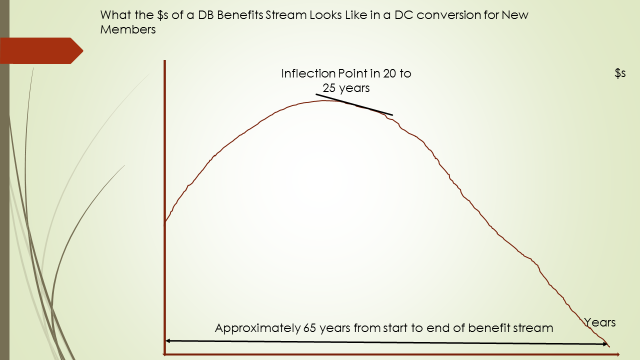 This is why I always caution that pension obligation bonds are not sound fiscal policy. Why compress the benefit stream into a shorter period of time and lose the advantage of the present value of a dollar?

The conversion of a DB plan to a DC plan can take advantage of this extended cash flow. We will explain how to design a transition that requires no new revenues and pays of the existing UAAL in Part 4 of this series. In part three will deal with a misleading representation about the application of a Governmental Accounting Standards Board (GASB) pronouncement that is used by opponents to make conversions appear much more expensive than they are in actuality. We will also discuss how converting to a DC plan, when properly done, can reduce a state or local government’s borrowing costs.