The Death Tax – Taxes on Death

By: Will Freeland and Matt Portu

It has been said that the only certainties in life are death and taxes. Thankfully, across the states it’s becoming less likely for Americans to be actually taxed on death. Recently, the Wall Street Journal had an outstanding editorial on the Death Tax (otherwise known as the estate or inheritance tax) across the 50 states, titled “The Die Harder States.” The editorial points out a positive trend: four states have recently scraped their death tax. Recently, we chronicled North Carolina and Indiana’s pro-growth move to eliminate their death tax. With the addition of Ohio and Tennessee to the “States that have recently repealed the death tax”, there are now 18 states (plus the District of Columbia) that see it fit to tax the hard-earned and previously-taxed assets of the deceased as they are passed on to their heirs.

This trend is a major cause for optimism in state economic policy, particularly in the face of an extremely tepid economic recovery in the wake of a massive economic contraction and characteristically poor policy by the federal government with respect to the death tax (previous cuts were allowed to expire, bringing the federal death tax up to a 40% rate on estates with an exemption of only $5 million). Despite this generally positive trend on the state level, the Journal points that some states have taken the path of pain:

“The grand prize for self-abuse goes to Minnesota, which this year enacted a new 10% gift tax with a $1 million exemption. A gift tax is a levy on money given away while still alive. This tax is in addition to Minnesota’s 16% estate tax. The new law is all the more punitive because it applies the 16% estate tax (6% on top of the earlier 10% gift tax) to any gift within three years of death.”

We have chronicled the multitude of poor tax policies implemented in Minnesota recently in Chapter 1 of the 6th edition of Rich States, Poor States, and Minnesota’s recent “self-abuse” via the death tax is par for the course with this trend. The Journal goes on to name and shame the 18 states (plus the District of Columbia) that still tax the assets of the recently departed in a helpful chart created from the Family Business Coalition data: 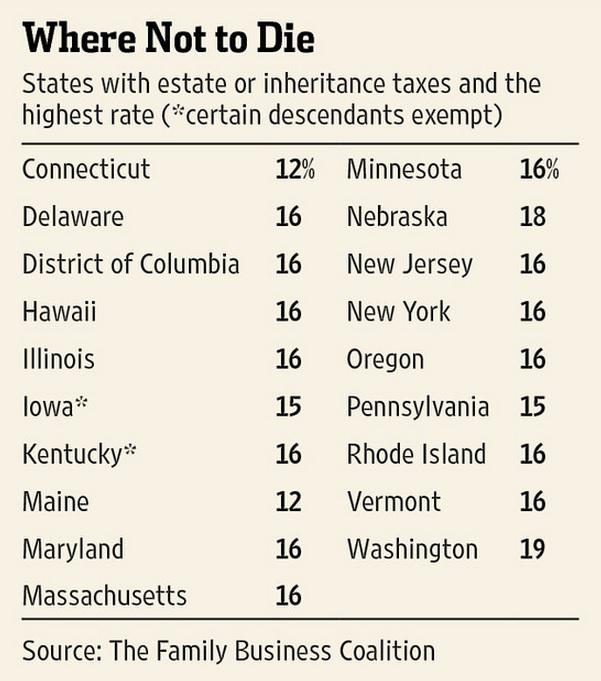 The reasons to reject this tax are numerous and the arguments in its favor are quite thin. First, death tax collections are an extremely small part of state budgets. The table below shows the percent of total revenue that gift and death taxes combined make up for the 18 states that collect this harmful tax (no data was available for the District of Columbia, which also levies a state death tax). Since the data available sums the death tax and also the gift tax, these figures actually over-measuring the amount of revenue brought in by the death/inheritance tax: 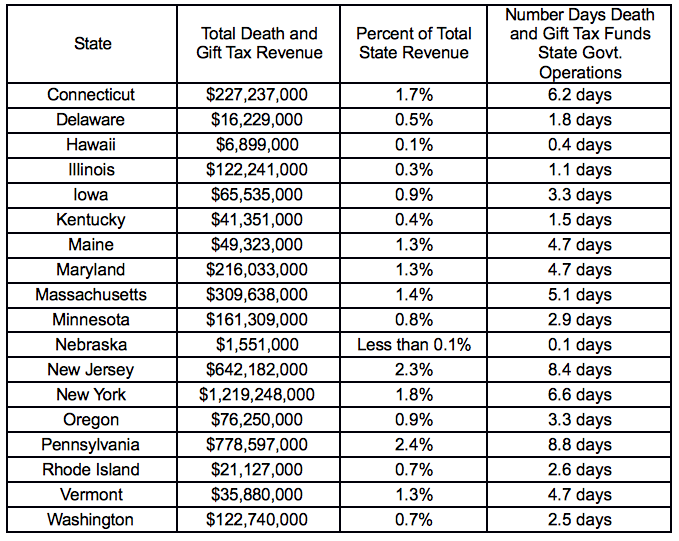 The small size of death taxes is an important point: they don’t largely exist to generate revenue to fund public services. Instead, they are a tool of so-called tax “equality” where the wealthy have their earnings redistributed in order to lower measured inequality.

Moreover, though the revenue extracted via death taxes is small, the tax can be extremely burdensome for families. Even given the federal exemption of $5 million dollars (far lower than some states—Minnesota’s exemption is only $1 million, for example), relatively small and mid-sized businesses, farms, and ranches inherited by the children of entrepreneurs may be forced to sell the family business because they don’t have the cash on hand to pay the death tax on a business without divesting some or all of their parent’s labor of love.

By the same token, the small size of revenue the tax collects obscures one of the death tax’s largest costs. Death taxes create a major disincentive to save and the effect of that disincentive is substantial. A study authored by Lawrence Summers, the former head of President Obama’s Council of Economic Advisors and the Treasury Secretary under President Clinton, found that the death tax had lowered the total capital stock by over a trillion dollars. The capital stock can be defined as the total value of durable assets in an economy that aid in production. It is the machines, factories, tools, computers, software, and technical know-how (i.e. human capital) that aid in the production of goods and services. It’s hard to put a clear human price on such an economic consequence, but given that capital accumulation is the major driver of technological advancement, lower prices to consumers for goods and services, competitive firms that are able to expand hiring, and increasing wages of workers by improving labor productivity, it’s safe to say that each and every American, along with citizens of the world, is worse off as a result of the death tax.

Not only that, but business owners are faced with making decisions about how to structure their business and assets based on the advice of these estate planners in order to ensure they receive the most preferential treatment from the estate tax code and shield the product of their life’s work. These decisions create economic inefficiencies and economic waste as individuals respond to the incentives built into the tax code instead market forces. As we’ve pointed out previously, a business making decisions in response to the tax code is the definition of non-neutral tax policy, and therefore bad tax policy. Again here, there is a direct human impact as society is poorer because of the direct costs and unintended consequences of the death tax.

Finally, it is unclear what the goal of the death tax even is. On its face, the goal seems to be to reduce income inequality and prevent an intergeneration “moneyed” class from developing on the backs of inheritance. But that doesn’t square with the basic facts of inheritance. As a recent WonkBlog post points out, only 14.7 percent of the wealthiest 1 percent’s total wealth came from inheritance as of 2007. Moreover that share is decreasing, down from 27 percent in 1992. Finally and most significantly, because as a percentage of income, the poor and middle-class actually pass on a high level of their assets, inheritance actually reduces income inequality. This on top of the fact that as we have recently chronicled, claims of increasing income inequality and middle-income stagnation are greatly over-exaggerated.

Thus, the death tax is a bad tax, associated with huge costs and bad incentives, taking in almost no revenue, and without rational justification. That may be why the majority of the 50 states have ditched it, as the Wall Street Journal helpfully points out. For these reasons, ALEC’s Rich States, Poor States Economic Outlook Index includes this destructive tax as among one of the fifteen factors that states are rated on. The death tax, like the other 15 policies measure by the Rich States, Poor States Economic Outlook Index, is destructive to income growth; job growth; and state competitiveness for business, capital, and talented labor, as we chronicle in Tax Myth Debunked and Chapter 3 of the 6th Edition of Rich States, Poor States. States canning their estate taxes are to be commended for facilitating a policy environment that enables opportunity and prosperity for their citizens.