In this space, we have written about an apparent connection between states that develop their natural resources and lower unemployment rates.  Between 1995 and 2011, the four states that saw their unemployment rates improve at the greatest rate compared to the national average are significant energy producers: West Virginia, North Dakota, Alaska, and Louisiana.

Data released by the U.S. Census Bureau in late 2013 illustrates a relationship between states that develop their natural resources and rising income levels. This is especially clear in counties in and around North Dakota, which have seen an explosion in energy production in the Bakken shale play.  However, income gains over the past five years or so also appear to have taken place in other “energy friendly” states, such as Texas and Oklahoma. 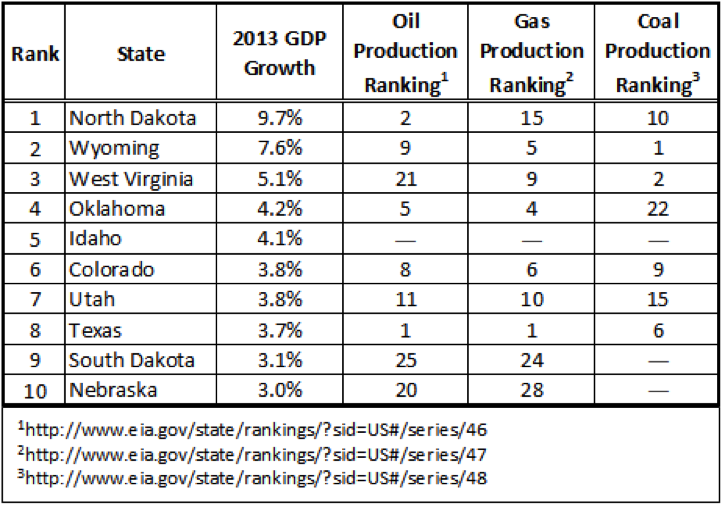 With the caveats that state economies are complex and that it’s difficult to identify causal relationships merely from correlations, even more data suggests that there is a link between significant energy producing states and economic growth.  In 2013, the U.S. economy grew at a fairly sluggish 1.9 percent, down from a 2.8 percent growth rate in 2012.

Not all was bleak in 2013, however.  In fact, many states far outpaced the national average with the most notable being North Dakota, whose 9.7 percent of GDP growth was over five times the national average.  North Dakota’s oil boom has been well documented – between 2010 and 2013, the state has experienced a 177 percent increase in oil production largely driven by hydraulic fracturing and horizontal drilling.

On North Dakota’s heels was Wyoming, the nation’s top coal producing state and a significant producer of oil and natural gas.  Mining in Wyoming was reportedly responsible for 6.1 points of the state’s 7.6 percent growth rate. West Virginia and Oklahoma, two other energy-rich states rounded out the top four.