Sue and Settle: How the EPA Replaces States with Environmental Groups

One trend that the report highlights is the rise of so-called EPA “sue and settle” agreements.  As it currently stands, the EPA has more mandates that it can handle due to limited resources and manpower.  With sue and settle, the EPA has figured out a way to cut states out of the process and instead negotiate the agency’s priorities with environmental special interests.

Here’s how it works: An environmental litigation organization like the Sierra Club sues EPA for failing to meet a deadline for regulatory action pursuant to the Clean Air Act or Clean Water Act.  Instead of challenging the suit, both EPA and the environmentalist groups immediately engage in friendly negotiations, which lead to a settlement that determines a deadline.  By dictating how EPA should use its limited resources, these sweetheart settlements effectively render official policy.

This is significant because states are often caught off guard and are not a part of these settlement negotiations.  Input from the states is essentially replaced by that from professional environmentalists.  Since 2009, the EPA has imposed at least $13 billion in annual regulatory costs resulting from sue-and-settle litigation. 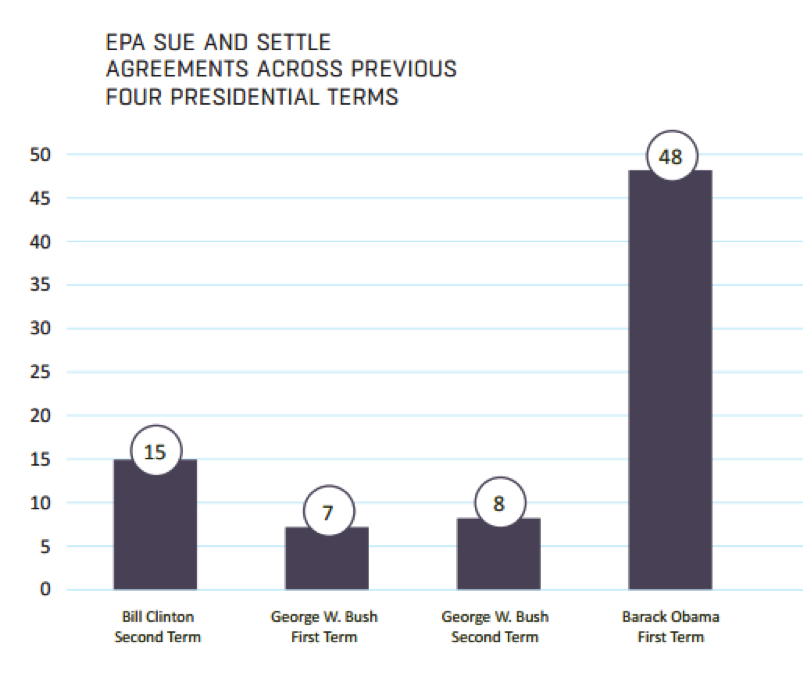 As the above graph illustrates, the frequency of these sue and settle tactics have almost quintupled during President Obama’s first term when compared to the number of occurrences during his predecessors’ administrations.

On Monday, Earthjustice and the Sierra Club filed a federal lawsuit against the EPA for not responding to their petitions regarding air pollution permits for several Pennsylvania coal-fired power plants.  These two groups claim significant flaws in the permitting of these power plants and say that the EPA never accepted or denied their petitions to make changes within a 60-day legal deadline.

Will these power plants and Pennsylvania policymakers become the latest victims of sue and settle tactics?  Only time will tell.