Reforming the Federal Corporate Tax and Individual Income Tax: A Step in the Right Direction

Earlier today U.S. Representative Dave Camp, Chairman of the House Ways and Means Committee, released a bill designed to fundamentally reform both the federal corporate and individual income tax (press conference video here and executive summary here). America is far overdue for such reform. As Camp points out in the Wall Street Journal:

“According to Nina Olsen, the National Taxpayer Advocate at the IRS, Americans overall spend over six billion hours and $168 billion every year to file their returns. This is stark testimony to the complexity of the tax code. Meanwhile, owners of small businesses face tax rates as high as 44.6%, while the total (state and federal) U.S. corporate rate, 39.1%, is the highest in the industrialized world.”

Representative Camp is right: the U.S. federal tax code is extremely uncompetitive. The U.S. has the highest statutory and effective corporate tax rate in the world. And that’s before shareholders pay dividend and capital gains taxes on the distributed profits and gains already taxed once via the corporate income tax. The tax rate on entrepreneurs and small businesses filling their business income as a “pass-through entity” personal income tax code aren’t much better, as two Tax Foundation maps demonstrate: 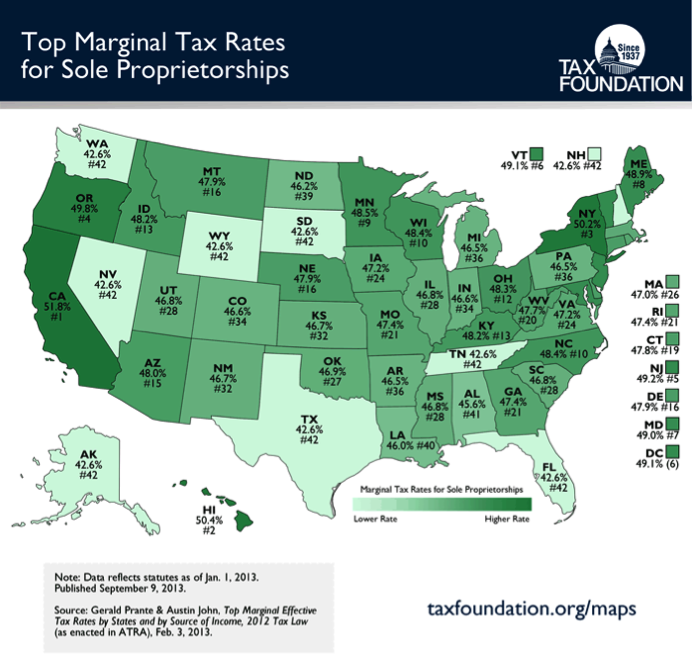 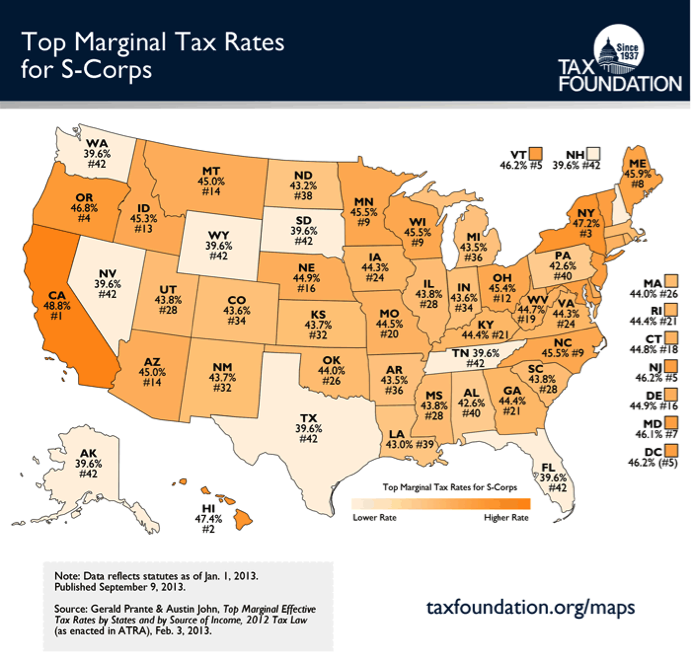 In the face of federal inaction in DC, the states have led on tax reform in both voice and action. The states have called on the federal government to lower the federal rate in an ALEC model resolution. And the states have led by cutting and simplifying taxes across the 50 states, with 17 states cutting taxes in 2013 alone. States like North Carolina, Michigan, Kansas, and Indiana have lead by example with recent reforms, just as states like Texas, Florida, and Tennessee have lead by example for decades with low, simple, fair taxes. Many more states are poised to cut taxes in 2014. The reason is clear. Here, in two charts, is the performance of states with no corporate income taxes and no personal income taxes: 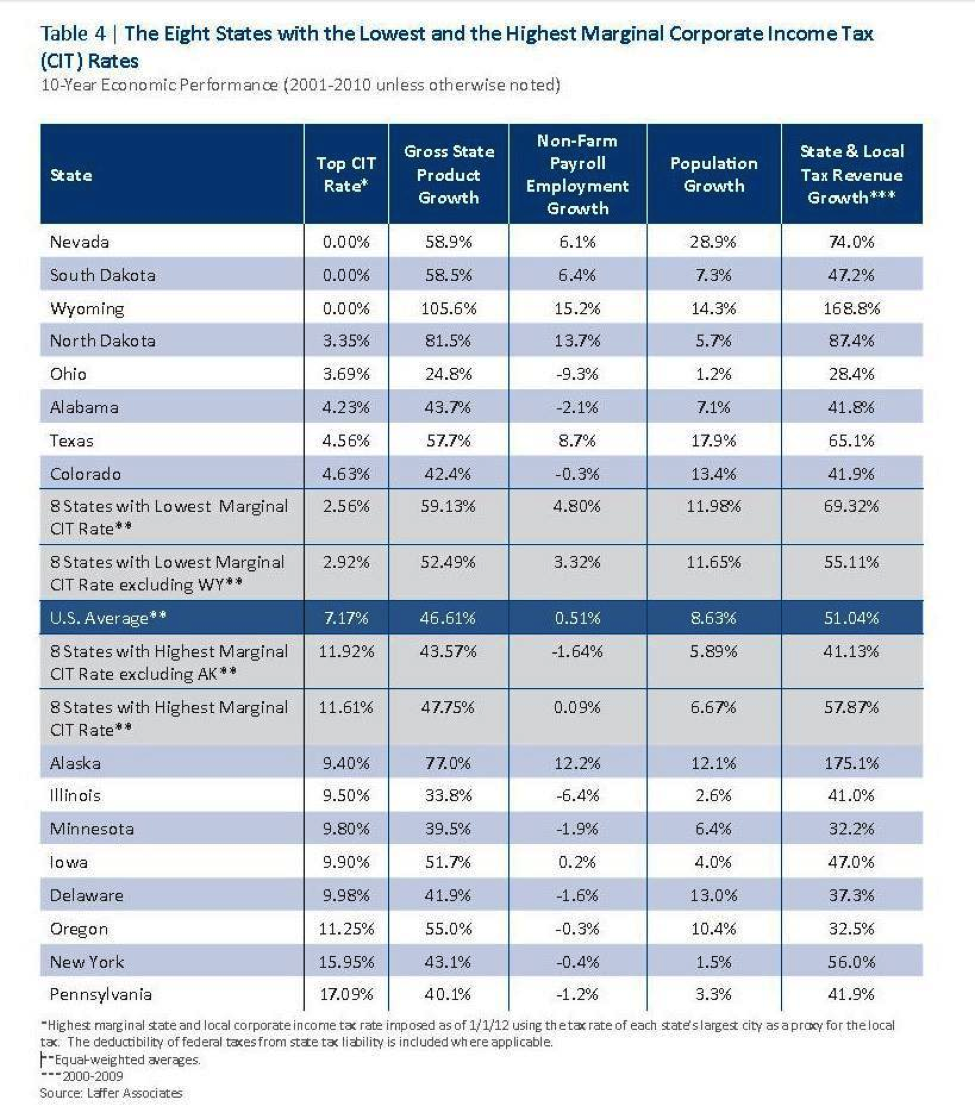 Still, states are forced to compete within the uncompetitive federal tax policy environment. As such, they can improve extensively relative to the other 50 states but very little relative to global competition because states cannot escape bad federal policy. Even if states have no income or corporate tax, they still are hurt in global competition by the abysmal federal tax code. As is the case for individual states with low or no corporate and personal income tax, the United States will see higher economic performance then its competitors with a lower, simpler federal tax code. It’s far time that the states and their citizens not be forced to overcome the broken and uncompetitive federal tax code.

Certainly over the coming weeks and months, the details of Chairman Camp’s tax blueprint will be debated extensively, both positively and negatively. Camp’s plan should be judged based on the timeless principles of sound tax policy. At first glance, Camp’s proposal gets five things right:

Setting aside whether Camp’s bill represents ideal tax reform, certainly fewer rate brackets, lower rates, fewer carve-outs and loopholes, and lower compliance costs are a huge step in the right direction. The RATE Coalition, a group of leader in support for sound federal tax reform, has good things to say about the proposal. Moreover, using economic competitiveness and growth as a primary measure of a sound tax proposal, Camp’s proposal scores well, according to the Joint Committee on Taxation (more jobs, higher pay, stronger economic growth).

Given a gridlocked federal policy environment that has set pro-growth policy aside, Camp’s proposal is a breath of fresh air and an important opening salvo in a lengthy debate on federal tax policy. Whatever the shortcomings of the proposal, it is a step in the right direction and a good framework for tax reform discussions. The experience of the states suggests that Chairman Camp is headed in the right direction.