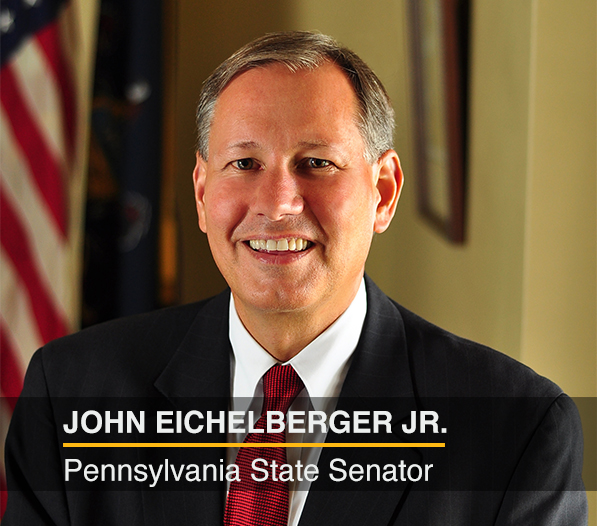 This week, ALEC and FreedomWorks introduce Pennsylvania State Senator John Eichelberger Jr., from the 30th District. His district consists of Blair and Fulton counties, as well as portions of Cumberland, Franklin and Huntingdon counties. First elected in 2007, Eichelberger is currently the chair of the Education Committee, and the vice chair of the banking and insurance committee. He also serves the Appropriations, Finance, Judiciary, and Local Government committees.

Senator Eichelberger – I was recruited to run for office against a 32-year Republican incumbent, who was the President Pro Tem of the Senate. Conservatives from around the state felt that his liberal voting record and, more importantly, his leadership on issues important to the economy of our Commonwealth, had to end. Although I was reluctant to run, I ran with the hope of changing the internal corruption in the system, standing for pro-life, pro-family values, and refocusing our tax and regulatory policies on free market growth.

Senator Eichelberger – The biggest issue we face is our inability to produce a balanced budget without tax increases, money shuffling, and exaggerated revenue projections.  This comes from a dogmatic view of big government that resists change.  We must take a fresh look at what services should be provided and how they would be delivered in the most efficient and productive manor.

If you could wave your magic wand, what would you like to see immediately implemented in your state?

Senator Eichelberger – I’ve learned that being on the cutting edge of conservative legislation means more about advancing the issue than passing that bill at that time. One example is my Paycheck Protection legislation that I initially couldn’t get off the ground. However, it got through the Senate the last two sessions.

Senator Eichelberger – ALEC is always there to provide information about what other states have done or are doing through current legislation.  They have experts available to discuss innovative ideas and can connect me with leaders from other states or federal officials to gather information about virtually any issue.  They are a full service resource.

Senator Eichelberger – I’m a runner and take pretty good care of myself, but I do like to eat.  One time at an Ambucs Steak Bake, I had 14 New York Strips in one sitting, a record that still stands.