5 States That Can Be Thankful For Rejecting Bad Policy

Every year in late November, Americans take a moment to consider how fortunate they are for all of their worldly blessings and give thanks to for the good things in life. Here at ALEC, we take time not only to give thanks for friends, family, health, and the blessing of living in this fine country, but also for the outstanding policy reforms many states have chosen to pursue over the last year. Despite federal gridlock, the states continue to lead the way towards fostering more competitive economies that ensure shared prosperity and the opportunity for individual citizens to seek and achieve prosperity—the American dream.

Yesterday, my colleague Ben Wilterdink highlighted many of the 18 states whose taxpayers can rightly give thanks for policy reforms enacted in 2013. Today, I would like to highlight some of the states that rejected bad policy or wiped a bad policy off their books entirely. These reforms will help to unlock the creative potential and prosperity of their citizens.

Repealing the Death Tax in North Carolina and Indiana

In 2013 both Indiana and North Carolina took a huge step towards sound tax policy by eliminating their state death tax. The list of reasons why the death tax is poor tax policy is long. We recently chronicled a laundry list of problem with the death tax and pointed out that “the death tax is a bad tax, associated with huge costs and bad incentives, taking in almost no revenue, and without rational justification.” As such, both states are to be commended for taking the leap and not simply reforming a bad tax, but eliminating it entirely.

Earlier this month, Colorado voters we 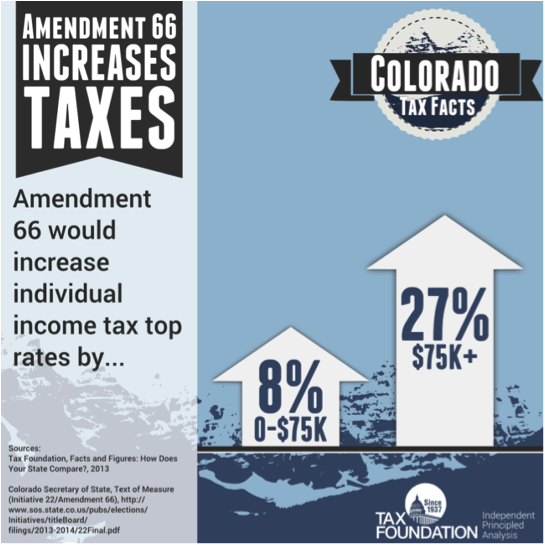 nt to the voting booth and voted down a huge and unnecessary income tax hike. We chronicled Amendment 66’s defeat by a 30 point margin, which would have raised taxes by $1 billion. Moreover, the ballot measure went down despite opponents of the proposal being massively outspent by the caucus of tax hikers that supported soaking Colorado citizens with higher taxes. The Tax Foundation graphic below details the damaging tax hike Coloradans dodged:

In 2013 Massachusetts passed a large tax hike on computer software. The tax utilized many of the hallmarks of bad tax policy: large tax hike in a high tax state; targeted just one class of companies; stifled innovation by taxing one of our nation’s most innovative industries; and taxed business input and business-to-business transactions, thereby creating tax pyramiding. Thankfully, due to massive public outcry, nearly every state political leader back away from the tax and it was promptly repealed in its entirety. We are thankful for that repeal.

Despite the efforts of many determined activists and legislators, Illinois has avoided turning their flat income tax into a “graduated” or “progressive” tax, where some families are targeted for higher rates than their fellow citizens. Moving away from a flat tax would have been a large tax hike, made the state tax code less neutral and fair, and would have been destructive to economic growth. Thus far, opponents of the tax hike have been able to hold proponents at bay and for that, taxpayers give thanks.