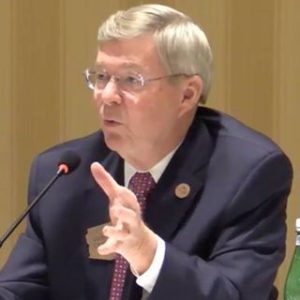 This Week, ALEC and FreedomWorks introduce Arizona Representative Vince Leach. Representative Leach’s experience ranges from work on the school board all the way up to County Government, the State Legislature, the Arizona Corporation Commission, and the Arizona Independent Redistricting Commission. His passion for public service led him to run for an open State House seat in 2014. Representative Leach is a Vietnam era veteran and has over thirty-five years of sales and executive business management experience in the national and international marketplace. Rep. Leach is a graduate of the University of Wisconsin- St. Point with degrees in Political Science and History. He and his wife Charlene are natives of Wisconsin and now live in SaddleBrooke, Arizona. His son, an engineer with a national firm, still resides in Wisconsin.

I moved to Arizona in 2009 with plans to retire off of investments in church bonds. There was just one problem: Arizona didn’t permit individuals to purchase church bonds. I set out to change that law. First, I had to convince the Arizona Corporate Commission to surrender their jurisdiction on the issue. With that done, I next had to persuade the Arizona Legislature to consider the issue. It took three years, but I was finally able to get the Legislature and Governor to revise Arizona law to permit individuals to purchase church bonds. It wasn’t easy, and it certainly wasn’t fun, but the experience convinced me that one person can make a difference. While I didn’t know it when I began the fight, it would be the beginning of my political career.

In your view, what is the biggest issue facing Arizona?

Arizona’s water management is undoubtedly the biggest issue facing the state. As the West continues to suffer through persistent drought, securing the state’s water supply for the future is of critical importance. There’s an old saying in Arizona that whiskey is for drinking and water is for fighting over. It will be extremely difficult to reach consensus while balancing the needs of competing stakeholders and negotiating with other states, but Governor Ducey and the Arizona Legislature continue to work to that end.

If you could “wave your magic wand,” what would you like to see immediately implemented in Arizona?

I would love to turn over much of the federal land in Arizona to state control. Over 80% of Arizona is public land, and over half of that is owned by the federal government. When that much of a state’s land is off limits to commercial development and property taxes, it poses significant challenges to state government.

Do you serve on any committees, if so which committees and why?

I passed a couple of bills this session that protect private and charter schools from roadblocks put up by cities and school districts. HB 2461 prohibits cities or counties from using zoning regulations to discriminate against private schools. We had an instance in Arizona of a city requiring private schools to operate on five acres or more of land but only required public schools to operate on one or more acre. HB 2460 prohibits school districts from selling or leasing a vacant building for a financial offer that is less than an offer from a charter or private school. Arizona had a school district accepting bids for unused school buildings that are lower than the bids from private and charter schools simply because the school district didn’t want to have to compete against other schools – not only does that shortchange students but it shortchanges taxpayers.

What are some takeaways from your success that other legislators can apply to leading difficult reforms?

My advice is to become totally invested as a bill sponsor, use all resources available, talk to stakeholders, educate your colleagues, don’t rush the process and, most importantly, be persistent.

Not only does ALEC give me a sense of how lawmakers in other states are tackling similar problems, but their research and model policy gives me confidence as I draft and move legislation. Interaction with legislators from across the states is extremely helpful.

I served as a youth and high school soccer official for over 18 years.