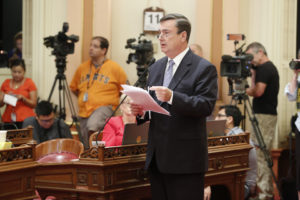 This week, ALEC and FreedomWorks introduce California State Senator Joel Anderson. Senator Anderson spent 4 years of service in the State Assembly and 4 years of service in the State Senate. In 2014, he was re-elected to represent San Diego County for the second term in the Senate. From the start, Senator Anderson has worked hard for the people of San Diego. He has received “Legislator of the Year” awards from numerous organizations over several years. He is recognized for his work with Veterans and their families, and protecting small businesses and taxpayers.  While Senator Anderson’s accomplishments are many, the most important role in his life is being a husband to his wife Kate of 28 years, and a father to their three children – Mary, Maura and Michael.

As a business owner, I was frustrated by the State’s hostility towards hard-working people trying to raise their station in life. By becoming business owners, these people are the economic engine of our economy. I spent years volunteering on campaigns and doing grassroots organizing around issues that I was passionate about, and I got tired of being let down by politicians who got elected and then chose to do nothing. The legislature provides the opportunity to make my community a better place, and it’s been an incredible honor to represent my constituents for the past 11 years.

I represent nearly 1 million people, so one way that I try to make myself available to them is to hold about six to eight town halls in different communities across my district every year. At every one, I always tell the crowd what a shame it is that people spend more time researching their next car than their next president. What no foreign power has tried to take from us by force, millions give away for free by not exercising their right to vote. People need to be engaged, they need to get their friends and family engaged and they need to start holding their representatives accountable at the ballot box. Until they do, nothing is going to change in California.

I would like to see more transparency, especially during the elections. Most of what is voted on in Sacramento stays in a vacuum. Sadly, the press rarely asks the obvious question that most people are interested in asking.

Over my twelve years in the legislature, there have been many meaningful endeavors that I’ve been involved with of which I am very proud. To be effective in California’s legislature, one has to find areas of common ground with members from across the aisle, and I’m proud to have authored or co-authored 434 bills that have become law.

When I was a freshman assemblyman in 2007, I was put on one of the worst committees for Republicans – the Public Employees, Retirement, and Social Security committee. But as I dug in to learn about our state pension system I was shocked to learn that public money was invested with firms violating U.S. sanctions on the Islamic Republic of Iran.

Governor Arnold Schwarzenegger announced to the world that he would sign AB 221 on the floor of the United Nations during his speech to the General Assembly.

That was an incredible experience to work across the aisle to pass legislation essential to our values and to catapult California in front of an international issue that led dozens of other states to follow suit.

Do you serve on any committees, if so which committees and why? How do you think that you have impacted them?

I’ve served as vice chair of the Senate Public Safety committee since 2011, and it has been a tremendous learning opportunity for me. While we don’t always agree and often are on quite opposite sides of an issue, over the years I have partnered with the democrat chairs of the committee on important criminal justice reform where our values align.

For example, the previous chair and I jointly authored a bill to provide accountability with the use of solitary confinement in our prisons and to allow prisoners in solitary to take advantage of rehabilitation programs.

This year, the current chair and I are partnering on legislation to compensate the wrongfully convicted and to reform current accomplice liability law to align with their actual culpability. I hope my overall impact in the committee during my tenure was to be a strong advocate for our law enforcement community, a hawk over our constitutional protections, and demonstrate how conservatives can work across the aisle on policies that rehabilitate offenders and set them up for success after their release.

Serving as California’s public sector chair and on the board has enabled me to build relationships with policy leaders across the country, provided valuable opportunities to learn from experts on the critical issues facing not only my state but every state in the country, and exposed me to best practice in other states.

My family nick name is “Fry King.” If you can grow it, I can fry it! 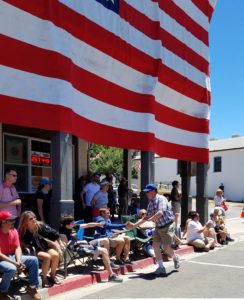