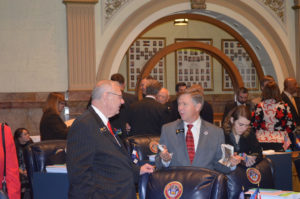 This week, ALEC and FreedomWorks introduce Colorado State Senator Kevin Lundberg.  Senator Lundberg has always had a strong interest in government—starting early—he served as a precinct committeeman, district captain, and campaign volunteer, and was chosen to participate in the Colorado Republican Leadership Program in 2000. He ran for the state senate in 1998 and was narrowly defeated by the incumbent at the time. In January of 2000, Governor Owens appointed him to serve on the Colorado Commission on Family Medicine. In 2002, he was first elected to the Colorado House as a Representative for District 49. Several years later he was appointed to complete the final two years of the current four year term for Senate District 15. He has a deep love for his state and backpacked all across the Colorado Rockies, including a 700 mile trek along the Continental Divide. He has owned and operated Lundberg Productions, a media and video production service, for the past 29 years. He and his wife Sandy have three children and live on a farm near Berthoud.

I ran for office because I have three children and I want to see them have the best opportunities to live in a free and prosperous state.

In your view, what is the biggest issue facing Colorado?

Colorado state government has a spending problem (sound familiar?). Despite our having TABOR (Taxpayer’s Bill of Rights) in our constitution, we still grow more government than our personal liberties can afford.

If you could “wave your magic wand,” what would you like to see immediately implemented in Colorado?

I would love to see the legislature and governor get serious about Colorado’s spending problem and implement a budget that does not increase.

Most recently I have been on the Joint Budget Committee, which creates the state budget every year. I have helped give that committee, and the state’s budget, a more conservative bend, but not nearly enough.

In my 16 years in the Colorado legislature I have worked on many issues. Two stand out in my mind. The first was not a bill passed, but simply a recommendation I made to Medishare, a faith-based medical cost sharing program. I suggested they form an alliance with other, similar ministries, join ALEC and look for ways to secure their legal standing in state laws. This they did and ultimately it resulted in faith-based medical cost sharing families gaining an exemption to the individual mandate in Obamacare.

The other is starting the Republican Study Committee of Colorado (RSCC.US), which has helped shape public policy in Colorado for over a dozen years.

ALEC has been an extraordinary way to connect with other legislators and public policy experts from across the country. I can trace many of my most meaningful accomplishments as a legislator back to a connection through ALEC.

What is your favorite thing about Colorado?

Colorado is a beautiful state with incredible mountains, in which I have backpacked many, many times, but for me most importantly it is my home where my family has been for generations and I trust for generations to come.

I have enjoyed singing for most of my life and at times I get the opportunity to sing our nation’s anthem, including the final verse!